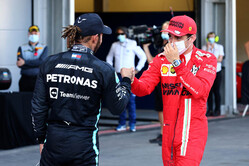 Lewis will start the Azerbaijan Grand Prix in P2 after a stunning lap in Q3 having shown solid form throughout qualifying. For the second race in a row, Valtteri had a flying lap in Q3 halted for a red flag despite being third-quickest in the first sector and is forced to settle for P10.

Lewis Hamilton: Given the difficult circumstances, I'm just overwhelmed and really happy to get that lap in. We definitely weren't expecting that, and this is such a monumental result for us because we've been struggling like you couldn't believe all weekend. We kept our composure and continued to have difficult conversations in the background, challenging one another and just never taking "no" for an answer.

Today was the biggest jump we've been able to make between FP3 and Qualifying. We discovered something at the end of FP3 and we continued to push in that direction. It's been so difficult and there was so much work back at the factory overnight and today - I hope everyone's happy but we've still got a job to do tomorrow.

Our race pace is a lot better than our single lap pace, we're miles off on a single lap and a lot closer in race pace. We don't understand why, but I'd like to think we can take the fight to the other teams tomorrow.

Valtteri Bottas: My pace has been suffering all weekend and I feel like ultimately, something is wrong because I'm on the limit but so far off the pace - if I push harder, I'm in the wall. We alternate and this weekend was Lewis' choice to decide who goes first out the garage so obviously in the first run on Q3 he had my tow and in the second run I tried to get tow from Charles but there was the red flag which stopped my flying lap.

Tomorrow will be a challenge but I know anything can happen in this race - I've been here before one lap down and finished back at the front. So you never know and for sure, we'll keep trying and I'll just try to understand everything I can tonight and fight tomorrow.

Toto Wolff: The job that has been done back in Brackley and Brixworth, and from the engineers here, is fantastic - they designed an incredible programme which we went through line-by-line. We made a series of experiments - some were useful, others not but we were able to gain answers to our questions and then produce a car that was good.

Yesterday our long runs looked good and we were on a similar pace to the Red Bulls so I think we have a decent shot at a good result tomorrow.

Andrew Shovlin: We didn't really expect to have a car on the front row going into the session but Lewis made the most of what he had and was able to put in pretty impressive laps throughout. He'd managed to get a better feel for the front end in the morning session and managed to build on that in qualifying which was encouraging. Valtteri has had a tough weekend from the word go. We need to pick through his car to try and understand where the issue is as he's just not got the grip that Lewis has had, regardless of where we have put the setup.

The race should be interesting tomorrow; we had a reasonable long run on Friday and the race is as much about pace and degradation as it is track position. It's also one where anything can happen with a high probability of safety cars and red flags but hopefully we can move forward with both drivers.