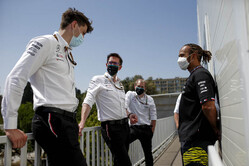 Lewis Hamilton has admitted that his criticism of his team following last month's disastrous Monaco weekend should have remained behind closed doors.

On a day the already struggling world champion, lost out to Pierre Gasly, Sebastian Vettel and Sergio Perez during the pit stops, leaving Hamilton struggling home to seventh, teammate Valtteri Bottas suffered the pit stop from hell when one of his wheels could not be removed and he was forced to retire.

"We lost a lot of points today for a really, really poor performance from the team," said Hamilton in the aftermath, "I’m definitely a little bit surprised by it."

Having had time to cool down, the world champion says he was wrong to add to his team's obvious pain by openly criticising it.

"In the heat of the moment, you don't always say always the best things," he admitted. "I think constructive criticism is always a good thing, better said behind closed doors and that's what we've been doing.

"There was no one single person to blame," he added. "I was very much part of the decision-making process, and after going back and having a look, and analysing things, there are things that I could have said that would have set a domino effect on.

"So we know that we could have done better and one race doesn't define us," he insisted. "Of course you always try and do better in the future... as I said, we win and we lose as a team so we will push forwards and hope for better."

Looking ahead to this weekend, he said: "It’s a slightly different circuit with different requirements, and obviously the temperature difference is a bit different.

"So I think a different set of challenges probably this weekend. I don't think necessarily our performance will be the same as we saw in the last race."

While among the first to query the rear wing on the Red Bull, Hamilton wasn't quite as forthcoming when asked about the possibility of it being protested this weekend.

"Regardless of what I think, it doesn't really make a difference," he said. "I'm not looking to get headlines with it.

"I heard about it, I spoke about it and the fact is that they passed the tests that are given for this weekend so we proceed in the way things are.

"Of course it is an advantage on the straights, it can give good time, but we'll just try and be the best we can with what we have and hopefully the future will be better in terms of how they measure these sorts of things."