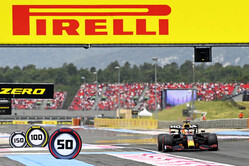 Red Bull driver Max Verstappen claimed Pirelli's 250th pole position, having also gone fastest by a big margin in FP3 this morning. He ran the C4 Red soft compound to set his pole time, which he also used to establish the best FP3 time in the morning.

Practically all the drivers used the Yellow medium C3 tyre for the crucial Q2 session, which determines the tyres they will start the race on tomorrow. As a result, all the top 10 on the grid is set to start on the medium.

Williams driver George Russell was the only driver to begin Q2 on the soft tyres, before switching to the medium. The medium was also used during the first Q3 run by Alpine's Fernando Alonso and McLaren's Daniel Ricciardo.

There were two red flags in the opening Q1 session, including one that ended the session prematurely with 20 seconds to go and prevented a number of drivers from completing their laps.

Temperatures remained dry and warm similar to yesterday, peaking at 32 degrees ambient and 46 degrees of track temperature. This might change tomorrow, with some forecasts of light rain in the morning.

The 53-lap French Grand Prix is set to be a one-stopper. With all the top 10 choosing to start on the P Zero Yellow medium tyre, a medium to hard one-stopper is the logical way forward for them - and this could be the case even for those outside the top 10. In fact, for those further down the field, starting on the P Zero White hard could be another option as well, before switching to the medium or P Zero Red soft later in the race.

A one-stopper from soft to medium is definitely too demanding, especially if it's warm, so the only other obvious choice will be soft to hard (although that will require a bit of tyre management on the soft).

However, there's also a small chance that there could be some rain tomorrow morning, and while that's unlikely to persist until the race, a wet surface in the morning might affect tyre strategy.

Mario Isola: "The almost unanimous decision to run the Yellow medium tyre in Q2 gives some idea of what we can expect from the race strategy tomorrow, with the medium C3 compound offering more durability than the soft without costing too much by way of performance. But with all the top 10 starting on the medium, this leaves the way clear for those behind them to try something different tactically and potentially gain an advantage in the early stages of the race. This could be the case in particular if it rains and temperatures then drop tomorrow, which might bring the track back towards the softest compound. Congratulations to Max Verstappen and Red Bull for pole position, which also happens to be Pirelli's 250th pole in Formula 1."