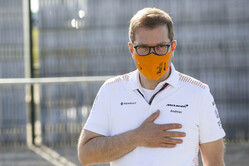 McLaren's Andreas Seidl admits disappointment at the general lack of transparency over the tyre failures in Baku.

To continue the Agatha Christie, Sherlock Holmes trend, we have the body and we have the murder weapon yet still there is no clue as to who did the dirty deed.

While Pirelli declares it most certainly wasn't them and admits that both Red Bull and Aston Martin had the means and the motive, but it clearly wasn't them either, everyone remains totally baffled in terms of who was to blame.

Speaking at Paul Ricard, McLaren boss, Andreas Seidl has joined the discussion, admitting disappointment at the lack of transparency over what is a very serious issue, after all, we can count ourselves extremely lucky that nobody was injured in those two high-speed failures two weeks ago.

"It was a very interesting sequence of events this week with the TD coming out and seeing the carefully chosen words in the press releases and in the statements from all parties involved," said Seidl.

"What is a bit disappointing for us," he continued, "is that there is not more transparency in what actually happened because it was a safety-critical topic, what happened there in Baku, and normally in cases like that there is transparency of what is happening, which didn't happen so far towards the teams.

"So that's a bit disappointing," he admitted.

Asked what else he wanted to know, he replied: "There's a lot of criticism up in the air towards Pirelli, but in the end, I think that's not something we would support from our side. I think Pirelli has produced a safe product for this year.

"If we look at our car for example in Baku, if you were running the car within the regulations and following the prescriptions from Pirelli, there was no issue with the tyre.

"So that's why I think it would be important for everyone, for the entire paddock to have transparency in understanding what actually happened, and what was causing these failures in the end.

"There is a clear reason why we get the prescriptions from Pirelli, and why these regulations are in place," he added. "We as a team are fully aware of that, and we know we have to act responsibly with these prescriptions within the regulations in order to make sure that there are not tyre failures and we do not put our drivers at risk.

"The TD doesn't change anything in terms of what we did, what we have to do now or what we did in the past. As I said before, the regulations were clear before."