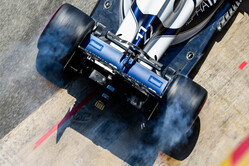 Following the high-profile failures in Baku, from this weekend's French Grand Prix the teams will face tougher checks to ensure they are not manipulating tyre pressures.

As ever, an F1 investigation has posed more questions than it has answered, yesterday's statement from Pirelli being no exception.

Making clear that the tyres were not in any way responsible for the failures that saw Max Verstappen and Lance Stroll crash out of the Azerbaijan Grand Prix, the Italian manufacturer said that the cause of the failures "was down to a circumferential break on the inner sidewall, which can be related to the running conditions of the tyre, in spite of the prescribed starting parameters (minimum pressure and maximum blanket temperature) having been followed".

"As a result of this analysis, Pirelli have submitted their report to the FIA and the teams," the statement continued. "The FIA and Pirelli have agreed a new set of the protocols, including an upgraded technical directive already distributed, for monitoring operating conditions during a race weekend and they will consider any other appropriate actions."

Indeed, it is understood that the technical directive, which runs to many pages and comes into effect this weekend, along with the more robust deflection test for the rear wings, is aimed at stopping the practice whereby some teams are believed to be manipulating tyre pressures.

Speaking in Monaco, Lewis Hamilton pointed to Red Bull's tactics over the previous weekend in Spain.

“If you look at the last race, for example, we were supposed to all keep our blankets on in qualifying," said the world champion. "Red Bull were allowed to take theirs off. And no one else is allowed to."

It's understood the Mercedes driver was referring to Red Bull removing the tyre blankets on Max Verstappen's car long before he headed out of the garage, thereby reducing the temperature which in turn reduces the pressure. The reduced pressure in the tyre means a bigger contact patch on the track surface, thereby increasing grip. QED.

Consequently, from this weekend far tougher checks will be carried out - some of them random - aimed at stamping out the practice.

With teams believed to have previously overheated the tyres in their blankets, thereby increasing the pressure to meet the mandated minimum, from this weekend Infrared checks will be carried out to ensure the teams are not 'cooking' their tyres.

Those tyres to be tested will have seals added in order that they cannot be interfered with prior to the checks, and no re-inflation of the tyre will be allowed.

While tyre pressures cannot be measured accurately during races, the teams have been told that it is their responsibility to ensure they remain within the limits set by Pirelli at all times, failure to do so resulting in them being reported to the stewards.

The move comes ahead of a new system due to be introduced next season, when mandatory standard tyre pressure and temperature monitoring devices are to be introduced, thereby giving Pirelli and the FIA better insight into the tyres running conditions.

An amendment to the 2022 technical regulations, Article 10.7.3 states: "All cars must be fitted with tyre pressure and temperature monitoring sensors which have been manufactured by an FIA designated supplier to a specification determined by the FIA.

"Wheel rims and tyre pressure and temperature sensors should be marked according to the corner colouring and labelling scheme defined in the Appendix to the Technical and Sporting Regulations."