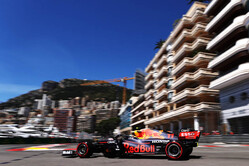 It's worth noting that, even before a wheel has turned, Race Director, Michael Masi has already updated his original event notes twice.

The lights go green and Russell is first out, followed by Raikkonen, Giovinazzi, Mazepin, Latifi, Alonso and Sainz.

The big question is who might be first to encounter the barriers this weekend, Mazepin, Latifi or Tsunoda.

In no time at all, all bar Hamilton are on track with a mixture of all three compounds, though the hards appear to be the most popular.

Russell posts a 23.902 but this is immediately beaten by Raikkonen (20.926). The Williams is on softs while the Alfa is on hards.

As Leclerc goes quickest (19.618), subsequently waving to the fans - possibly his neighbours - Hamilton heads out.

Verstappen goes second (17.072), ahead of Giovinazzi, Stroll, Russell and Leclerc.

As you can imagine, it is fast and frantic.

"Box now, box," Leclerc is told as he suggests that his engine is "broken". Subsequently adding that he thinks "fourth gear is broken".

Sainz (mediums) retakes the top spot with a 14.457, as Mazepin is already getting in the way of his rivals, in this case Verstappen. The Russian is currently 5.3s off the pace.

It appears that Leclerc does indeed have a gearbox failure which means his session is already over after just 4 laps.

It's not all bad for Ferrari however, as Sainz looks to consolidate his top spot with a 13.388, the Spaniard quickest in all three sectors.

And Hamilton is the first driver to fall foul of the track limits, the world champion having his time deleted after exceeding them at Turn 10. Ironically, it was on a cool-down lap.

While Hamilton is on mediums, title rival Verstappen is on hards.

The three quickest drivers - Sainz, Bottas and Hamilton - are all on mediums.

Despite traffic, Verstappen improves to third with a 13.970.

Vettel is now fifth, ahead of Gasly, Perez, Stroll, Russell and Norris.

Out come the yellows and then the VSC is deployed after Alonso clouts the barrier at Rascasse, damaging his front wing in the process.

Hamilton makes clear that he prefers corners to be identified by their names as opposed to numbers.

Raikkonen heads down the escape road at Ste Devote following a major lock-up.

With 21 minutes remaining, Perez is the first of the big guns to switch to the softs.

Despite a PB in S2, on his first flying lap the Mexican fails to improve on ninth. That said, he appeared to abort the lap in the final sector due to traffic.

Teammate Verstappen, on the other hand, has switched to mediums.

Back on track following his earlier mishap, Alonso has to make use of the escape road at Ste Devote.

As Perez continues to struggle, Verstappen goes quickest in S1. The Dutchman posts a PB in S2, finally crossing the line at 12.648 to go top.

Moments later, Perez goes second with a 12.817. The Mexican is on softs and the Dutchman on mediums.

Mazepin improves to 16th, ahead of Schumacher, Ocon, Russell and Leclerc.

That said, following a close encounter with the barriers the Russian isn't happy with the handling of his car.

Verstappen reports an issue with his downshifts, the youngster asking to return to a previous setting.

Surprisingly, Ricciardo is currently down in 15th, a full second down on his teammate.

In the dying moments, Perez improves to 12.487, consolidating his place at the top of the timesheet.