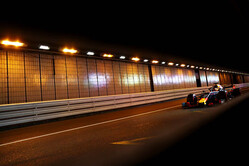 Such is the nature of the circuit, Monaco has a unique take on track limits, which are enforced with no discrimination and little mercy. Nonetheless, the FIA has chosen to lend a hand.

Over the years countless drivers have come to grief on the tight, twisty confines of the Principality, where the barriers are always just a few tantalising centimetres away.

This year however, as the crackdown on track limits continues, the FIA has announced that it will be keeping an eye on Turn 10, the infamous Nouveau Chicane that follows shortly after the end of the tunnel section.

"A lap time achieved during any practice session or the race by leaving the track and failing to negotiate Turn 10 by using the track, will result in that lap time being invalidated by the stewards," warns race director, Michael Masi ahead of this weekend's event.

Though these requirements will not automatically apply to any driver who is judged to have been forced off the track, each such case will be judged individually. Furthermore, in all cases detailed above, the driver must only re-join the track when it is safe to do so and without gaining a lasting advantage.

Finally, if a car uses the escape road at Turn 10-11, which is a common occurrence, the driver may re-join the track only when the lights, operated by the marshal on the spot, are turned green.