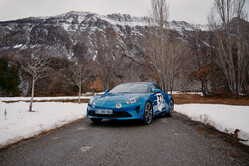 Esteban Ocon will demo the Alpine A110S on Thursday with a series of special stage runs during this week’s 2021 Rallye Monte-Carlo.

It will mark the first time that Ocon gets to grips with the A110S as an official Alpine F1 driver and his first attempt taking part in a rally event.

He will pass through two stages on the opening day of the 89th Rallye Monte-Carlo as the official VIP course car, starting with a private test run to fully understand the A110S in the unique conditions of the rally.

The rally begins with the official departure at 13:10 on Thursday in Gap, Provence-Alpes-Cote d'Azur.

Ocon will tackle SS1, a 20.58km route from Saint-Disdier to Corps and SS2 between Saint-Maurice and Saint-Bonnet 70 minutes before the official crop of World Rally Championship drivers including compatriots Sebastien Ogier, the reigning world champion, and Pierre-Louis Loubet, who trains with the French F1 driver during the winter off-season.

The Frenchman will have his race number, #31, emblazoned on the A110S, which will feature its traditional and iconic blue livery.

Alpine has a five strong entry in the RGT class during this week’s Rallye Monte-Carlo with Cedric Robert, Emmanuel Guigou, Philippe Baffoun, Pierre Ragues and Raphael Astier all piloting Alpine A110 Rally cars across the four days.

"This is a fantastic opportunity," said Ocon, "and I certainly cannot wait to experience Rallye Monte-Carlo for the first time.

"It’s a legendary event, a jewel in the calendar of motorsport and I know how special being part of it will be. I’m looking forward to driving the beautiful Alpine A110S. I had my first taste of the A110 in October with three laps of the Nordschleife. It was great that day; very comfortable and agile to drive. It’s born for this kind of challenge with the tight hairpins and mountain passes.

"Rallying has actually always been a dream for me, so driving the A110S in Monte-Carlo is a brilliant way to begin the year."

"This is our first activation bringing together Alpine Cars and the Alpine F1 Team," added Patrick Marinoff, Managing Director Alpine Cars. "Alpine has a very memorable history in rallying, especially here in Monte-Carlo.

"So, this is the perfect place for our F1 Driver to inhale some of the brand´s finest history and at the same time enjoy the agility and exhilarating driving performance of the A110 on the iconic mountain passes it was made for. Alpine is well represented at this event and we look forward, not only to Esteban’s stage runs, but also how the weekend itself unfolds for our cars."