Grosjean: I'm not difficult to manage 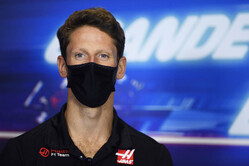 Over the years, certainly during his time at Haas, we have often referred to Romain Grosjean as 'Monsieur Moany'.

The Frenchman's expletive-filled radio outbursts are the stuff of legend, and while much of this is directed at the antics of his rivals, a fair amount of abuse is aimed at his car and his team.

Such has been his constant sweary ranting over the radio, that team boss, Guenther Steiner has told him to "shut up", as the Frenchman reeled off his latest litany of complaints.

Speaking to reporters in Bahrain today, Steiner was unusually diplomatic - certainly compared to what fans have witnessed on the Netflix documentaries - when asked about the Frenchman, who leaves the team at season end.

"Romain can be very challenging at moments," admitted the Italian, "but when you get him on the right day and the right time he was a very big asset to the team. I think we have to thank him as well what he did for us.

"We showed that we believed in him," he continued, "as we could have let him go after three years, after four years, but we kept him because sometimes he can be Romain. I call it being Romain, there is no word for it, which is tough to manage, but otherwise he was a great asset for the team and he will go into the history of Haas F1, he is a big part of it forever."

Told of Steiner's comments, while not going into a full-on rant, Grosjean denied that he is difficult to manage.

"I don't want to go into too much detail," he said. "I think I've brought a fair bit to the team and I've had moments. Yes, I've made mistakes... but who doesn't?

"Also, when you have a poor car, you need to be able to drive to 105 percent to get anything good," he continued, "and when you drive to that level there is a high chance you're going to make mistakes.

"When you have a top car, you can drive at 99.8% and that means you're more consistent. I've known both situations and that's why I can say that.

"Am I difficult to manage? I don't know. But some people did that very well with me in the past, so I guess it's possible."