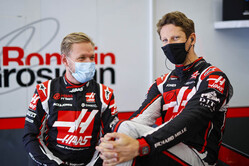 Formula 1 is beginning the final stretch of the 2020 campaign and the next two grands prix will take place in Bahrain - but on different circuit layouts.

The championship's first voyage to the island nation, the name of which derives from the Arabic for ‘two seas', took place in 2004 and since then the Bahrain International Circuit has twice held the honor of opening the season. In 2014 it switched to a twilight event, with floodlights lining the complex, and for 2020 it was set to hold the season's second round, just a week after the planned Australian opener. But the coronavirus pandemic forced a total restructure and Bahrain will instead host two events as Rounds 15 and 16 of the 17-event season.

First up is the Bahrain Grand Prix, which will take place on the usual grand prix layout at the Bahrain International Circuit. The 5.4km circuit features four long straights with heavy braking zones and slow-speed turns, allowing plentiful overtaking, but a set-up compromise is needed due to the medium and high-speed corners through the middle sector of the lap.

Haas F1 Team and drivers Romain Grosjean and Kevin Magnussen have previously thrived in Bahrain. Grosjean captured back-to-back podiums upon his first two visits to Bahrain as a Formula 1 driver and went on to claim a stunning fifth position in only Haas F1 Team's second outing in the championship back in 2016. Magnussen repeated Grosjean's fifth place two years later and last season Haas F1 Team got both drivers through to the top 10 shootout during qualifying.

The Turkish Grand Prix raised many talking points, primarily centred around the lack of grip on the new track surface - exasperated by the subsequent wet conditions over the weekend. Did you feel those factors added to the challenge faced by teams and drivers, or did it detract from the potential of what might have been?
Guenther Steiner: "I think it's one of those things - it was a one-off. You just deal with it. The organizers there tried to do their best, I wouldn't put any blame on them, they had everything working against them. Apparently when they resurfaced the track it rained, so they couldn't run cars. A lot of things happened which were not planned for. The same happened at the weekend. Not only was the surface slippery, it was also raining - which made it even worse. So, it was a one-off, we can take it as that and move on from there. I thought the race was pretty good, it wasn't a bad result, but you don't want to have this as the norm."

Traditionally the Bahrain Grand Prix is an early season race with many teams still getting to grips with their new cars following pre-season testing and the Australian Grand Prix. Do you think that's been a factor in the past for Haas F1 Team's stronger results there - notably Romain Grosjean's fifth place effort back in 2016 and Kevin Magnussen's top-six qualifying performances in 2018 and 2019?
GS: "I don't think so, I think it's more the Bahrain track has always suited our car - at least from 2016, 17 and 18. I think we were just at the right place at the right time at these races. There's no special magic in it that we always seem to run quite strong there. The only thing I would say is, I would love to see it happen again this year."

You have been a keen advocate of Formula 1 using this season as a test bed for new things. What excites you about racing on two very different layouts in Bahrain and specifically how much work has the team done to prepare for the Outer Track configuration - new to Formula 1 for the Sakhir Grand Prix.
GS: "I obviously like different things done differently - just to spice things up and to present new challenges, just so we don't have more of the same old all the time. I'm a big supporter of having two track layouts on the one racetrack. I think it shows smart thinking, so let's see what it brings. But when things don't work, I'm also one of the first to say we shouldn't go back and do this again. I'm really looking forward to Bahrain. Regarding the second layout, there's nothing special that we've done. We do our normal stuff of gathering information on the new layout and try to do the best simulation we can."

Formula 1 finishes its 2020 season with a triple header of races under the lights in the Middle East. While still a relatively new concept in Formula 1 racing, do you feel races such as Singapore, Bahrain and Abu Dhabi are enhanced by the format?
GS: "Yes, I think night races are very cool. Obviously, if the majority were night races then it wouldn't be so cool anymore, but at the moment the races we do have - I really like them. They're really enjoyable and it just changes it up a bit. It helps because during the day in those places it's really hot. At least in the evening when the sun is down it's a lot more comfortable to work in for all the teams. I think it's a very good thing to have a few races on the calendar under the lights."

The Turkish Grand Prix was a weekend unlike any another seen in Formula 1 in recent memory. Now you've had a bit of time to digest events from Friday through to Sunday - what's your take on how events played out and the challenges, notably the sheer lack of grip, drivers faced from start to finish. Did you embrace the challenge, or did it detract from the potential of what might have been?
Romain Grosjean: "It was a challenge, but it was the same for everyone. It wasn't something we were expecting from Turkey, but everyone did the best they could. I think I would have preferred the circuit with the normal tarmac - it would have just been more fun to drive. It shook up the order though, at least in qualifying."

The traditional grand prix layout at Bahrain International Circuit has seen you finish twice on the podium and record a memorable fifth place finish for Haas F1 Team in just its second ever Formula 1 race back in 2016. Tell us what you like about racing there - what suits your style?
RG:
"I think in general Bahrain's a really cool circuit, it's very good for racing. It's got quite an abrasive tarmac, so strategy normally plays a big part of it. It's dominated by low-speed corners and traction at the rear. I guess if you've got a good car on traction, and you don't destroy too much the rear tires, you're normally pretty fast."

We'll be racing under the lights twice in Bahrain and again at the season finale in Abu Dhabi at the end of this triple-header stretch. When was the first time you raced at night and are you a fan of it?
RG:
"I think the first time I raced at night was the Singapore Grand Prix. The biggest surprise for me was that the visibility was very good - it wasn't a problem. Everyone's looking forward to these races. Let's go there and finish the best we can with Haas."

The Turkish Grand Prix was a weekend unlike any another seen in Formula 1 in recent memory. Now you've had a bit of time to digest events from Friday through to Sunday - what's your take on how events played out and the challenges, notably the sheer lack of grip, drivers faced from start to finish. Did you embrace the challenge, or did it detract from the potential of what might have been?
Kevin Magnussen: "I think the Turkish Grand Prix was made more interesting by the lack of grip on the track and the extreme conditions that we faced - especially for a team like us. Having one of the slower cars, it meant that you could make a bigger difference as a driver. That was a challenge that I really liked. It actually made the race a bit of an opportunity for us. While we missed out, it wasn't because of lack of pace, we actually had the pace to be fighting for points because of those conditions, and the fact that the field was levelled out a little bit."

The traditional grand prix layout at Bahrain International Circuit has seen you qualify in the top six in the past two seasons. How would you describe the circuit and what do you need from your car to get a fast lap around its 5.4km layout?
KM: "I don't think there's too much that you need from the car that you don't need on other tracks. You need some good traction, but you do also need some good front. It's a track that's hard on the tires, so in the race you need to be able to manage the rear tires especially - at least on the traditional Bahrain layout. In qualifying you need the same as always, a good balanced car."

We'll be racing under the lights twice in Bahrain and again at the season finale in Abu Dhabi at the end of this triple-header stretch. What are the biggest challenges faced with a night race?
KM: "The main thing with night races is that on those race weekends you do two of the free practice sessions in the day. The cars and tires behave very differently in the day, compared to the night, as the track is way cooler in the night and that obviously affects how the car behaves. Setting up the car on these weekends can be challenging. You have to have a good FP2 as that's the only practice session you have in the dark. You almost have to ignore the flaws of the car in FP3 and not react too much as qualifying is then in the night again. That's the main challenge of these night races. The tracks are almost then better lit at night than they are during the day. You have things like shadows during the day, which you then don't have at night because you have the lights from all angles. It's very good visibility."