"It's a challenge," admits Brawn 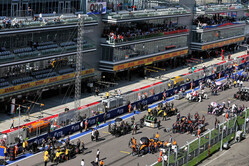 Two words that regularly appear in comments from F1 bosses in recent weeks are "fluid" and "unprecedented", and in all honesty this is fully understandable.

"Unprecedented", because the sport, indeed the world, has never faced anything like this before, and "fluid" because the situation is forever changing.

Revealing the schedule for the opening phase of the season was the easy part, for while the sport holds its breath, waiting to see if it really can move around Europe within its own little bubble (biosphere), at this moment in time nobody knows what happens next.

With a number of the flyaways in doubt, there might not even be any races outside Europe, while talk of races going ahead even if team personnel or drivers test positive only adds to the conundrum that is F1 2020.

Though the FIA's International Sporting Code states that for a championship to be deemed a "world" championship events must take place on three continents, the "unprecedented" situation this year means that this particular requirement will not have to be met.

Indeed, with the Formula One World Championship requiring a minimum of eight races, the 2020 could theoretically consist of just those eight events in Europe, according to F1 managing director, Ross Brawn.

"In theory the eight European races will constitute a world championship," he tells Motorsport.com.

Other than the fact that few would truly regard an eight race season as a true championship, the fact is that it is the flyaways that pay some of the heftiest hosting fees, which is why events like Bahrain and Abu Dhabi are almost certain to go ahead.

But what about the rest?

"It is a challenge," admits Brawn, "but I think it was a challenge putting the European season together. Two or three weeks ago, a month ago, it looked impossible. But now we've got a decent calendar put together.

"This situation changes on an almost daily basis," he adds. "In the main it's getting better, but there are still some countries which are going through the worst. So we need to give them, time, to see how quickly they are able to recover.

"Mexico is one where they still want to have a race, but they are in the throes of the pandemic at the moment. With the extra time we'll have now before we have to make some hard decisions then we'll just let things evolve, and see where we are.

"There's various options. I think we're going to be able to put a decent season together. I can't honestly tell you what shape it will be, but I think there will be enough races to make a good season."

In terms of the "fluidity" of the situation, he admits: "If I'm honest the ones you're confident in one day, it changes the next day because there's so much happening, so I don't want to speculate. There's a whole range of things that need to be considered, and the financial aspect is part of it, both let's say the holistic effect on F1, and the micro effect of how much it's going to cost us and the teams to go and race there. We're having to make those judgements. That's what we're faced with at the moment.

Asked about replacing some of the flyaways with events at tracks not on the original schedule, circuits like Imola and Hockenheim, he says: "They are options, but they are not options we are pursuing at the moment.

"So there are options, and we're fortunate that we've got these alternatives. We're trying to pursue Plan A at the moment."