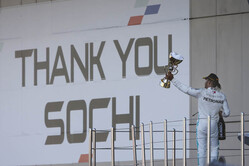 While the first eight (European) rounds of the 2020 season are agreed, there remains doubt over the remainder of the calendar.

After Chase Carey admitted that "there are races which are on the calendar which will probably still not occur", and that the sport is considering options, thought to include Hockenheim, Imola and Mugello, among the races in doubt are Azerbaijan, Singapore and Japan.

With Singapore in serious doubt, and scheduled to take place one week before the Russian Grand Prix in Sochi, Germany's Auto Motor und Sport claims that F1 is considering hosting a double-header in Russia, as it is doing in Austria and Britain.

While the move would not be popular with fans, who feel that Sochi isn't suited to decent racing, it is popular with F1 bosses, not only in terms of the race fee but the fact that it is ideally suited to the sport's plans for creating 'biospheres' at events.

Host of the 2014 Winter Olympics, Sochi has plenty of accommodation available, while its airport is close by and ideally convenient for the charter flights the sport is laying on for the teams.

Though the promoter, Rosgonki would prefer to host just the one event, it is open to holding a double-header if required.

"Sochi's infrastructure and the experience of the promoter company allow us to consider the possibility of holding an F1 double header," said a spokesperson for Rosgonki, according to MotorsportWeek.com.

"The traditional race weekend is still the preferred option," they admitted. "However, if necessary, the organisers are ready for an alternative.

"The race format will be confirmed following a thorough analysis of the situation, consultations with experts and decisions by the Government of the Russian Federation."