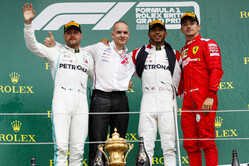 Silverstone's hopes of hosting back-to-back rounds of the 2020 Formula One World Championship season have been given a massive boost by the news that the UK government is to exempt certain "elite sports", including F1, from the forthcoming mandatory quarantine affecting all arrivals in the country.

Last week the government appeared to suggest that sport would not be exempt from the quarantine rule, due to be introduced on 8 June, but reports tonight claim that there has been a U-turn at the highest level.

The move comes 24-hours after the Secretary of State for Digital, Culture, Media and Sport, Oliver Dowden said that the government had published guidance which would allow competitive sport to resume behind closed doors from Monday.

"We welcome the government's efforts to ensure elite sport can continue to operate and their support for our return to racing," said an F1 spokesperson tonight. "We will maintain a close dialogue with them in the coming weeks as we prepare to start our season in the first week of July."

It's understood that F1 will release the revised calendar this week, though it is understood that at this stage only the European events will feature, with the fly-aways due to be added at a later date.

The season will kick off in Austria on 5 July at the Red Bull Ring, with a second race the week after.

Silverstone will most likely host the third and fourth rounds of the season, on 2 and 9 August.