Vietnamese GP to be held in November? 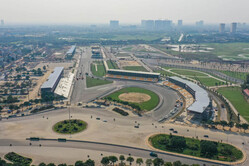 Local media reports that Vietnamese GP could be held in November with only local fans allowed access to watch the event.

Vietnam News is reporting that the Vietnamese Grand Prix, originally scheduled to take place on 5 April, may now take place in November.

As F1 continues to put its revised schedule together, VNS says that plans are to be submitted to Hanoi's People’s Committee and the FIA to host the race in November providing a number of safety conditions can be met.

VNS claims that if the race were to be held behind closed doors organisers could lose as much as $35m (£28.2m) , consequently they are looking at only allowing local race fans entry.