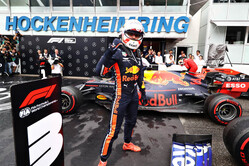 Though they will not be allowed access to the event, it's fair to say that British F1 fans have endured a roller-coaster ride over the last couple of weeks in terms of their home Grand Prix.

One minute it's looking good and the next the dream appears to be in tatters.

When the UK government announced that a mandatory 14-day quarantine was to be imposed on all travellers arriving from the end of this month, it was widely claimed that sports, including F1, would be exempt.

However, this does not now appear to be the case, and while the sport appears to be forcing the government into a confrontation alternative events have to be considered.

Step forward Hockenheim, which is looking to replace the British circuit, ironically in a year it was celebrating the 70th anniversary of the first ever round of the Formula One World Championship.

"We are talking with F1, that's correct," Hockenheim boss, Jorn Teske told Reuters. "We have spoken about the idea of having a race without spectators.

"We already checked if this could be possible, from dates as well as the legal general point of view," he added. "For us, it is an option."

However, he stresses that a decision needs to be made soon, as the circuit cannot afford to turn away business in the hope of securing a Grand Prix.

"What is really crucial for us is not to be pending now for months," he admitted. "We have to get our circuit booked and there is a high demand on track days, but Formula One is aware and understands our situation."

Unable to agree terms on a new contract with F1, Hockenheim was absent from the original schedule. However, Teske believes that this could work in both parties favour as the sport seeks to put together a new schedule.

"Others have a contract in place which might be a bit more complicated in regards to costs they had already and other costs coming up because of preparations which were initiated already," he said. "We can just say 'OK, if we find a time slot then we have these costs'. And then we come together or not. This might be a little advantage in our talks.

"We will see what happens. I think the most decisive (thing) is the current situation with quarantine in the UK."

Of course, the situation in the UK centres on three teams (and Pirelli) entering the country, not to mention the fact that (after Austria) the seven UK-based teams would be returning and thereby eligible for the quarantine, while moving the race to Germany would still effectively mean ten teams entering a country which still has restrictions in place.

Whatever happens, under normal circumstances Teske does not believe Hockenheim will be back on the regular schedule anytime soon - a situation not helped by the fact that there might not be a German driver (or team) on the grid next year.

"As long as we have no financial support from the government side, or from whomever else, we couldn't manage the normal fee. The risk is by far too high," he said.

"We found a solution for 2019, quite surprisingly, but this was a special situation. If we could find another solution for a mid-term agreement we would like to have it but at the moment we are concentrating on this season. This is challenging enough."