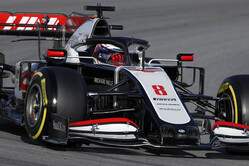 Romain Grosjean, in his position as a director of the Grand Prix Drivers' Association (GPDA), says that talks with F1 over the sport's return to the track are continuing.

With the sport currently set to return to action in July at the Red Bull Ring, which along with Abu Dhabi - which will host the final round - enjoys one of the best slots on the provisional calandar, the Frenchman confirms that his colleagues are most definitely up for it.

"We have got a WhatsApp group and it has been very active, I must say," he tells Sky Sports. "A lot of discussions on different subjects.

"We had a call with Formula 1, Chase Carey and Ross," he continued. "I just couldn't make the call, but I know Alex (Wurz) and Sebastian (Vettel) were on it, and then I got the feedback.

"We are trying to be as much involved as we can," he said, "trying to help the best we can because to help the teams we need to go racing earlier than later. Obviously not doing anything costs money for nothing and if we can go racing then we know what's happening.

"Everyone is doing his best," he added. "Obviously, it's very difficult to know what the situation is going to be like.

"Taking a lot of measures and trying to make sure that everything is great," he said, in anticipation of the work going on behind the scenes to ensure the safety of all involved once the season gets underway. "But maybe in July the world will be in a much better place and actually we can ease things up a little bit.

"As I said, the earlier we can go racing the better."