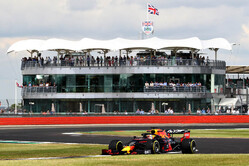 One can imagine that Silverstone managing director, Stuart Pringle, and leaders of the British Racing Drivers Club (BRDC), which owns the Northamptonshire circuit, must be on medication for extreme stress right now.

To say that the last few months have been a roller-coaster for the track, which has hosted 52 rounds of the Formula One World Championship over the years, would be a massive understatement.

Looking forward to celebrating the 70th anniversary of the world championship, Silverstone, which hosted the first ever round of the series in 1950, like the rest of us, had little idea what was around the corner.

Having seemingly got through its much publicised bad patch, things were looking rosy for the circuit and its owners.

With a new deal, with a reduced hosting fee, things were looking good. Though the new deal meant the annual race fee had to be paid in advance and, as previously revealed, the final payment for the 2019 race - which under the old deal was paid in arrears - was only paid in March, financially things were solid.

Then came the pandemic.

In all honesty it's been hard to keep track of things over the last couple of months. One minute the race was in doubt, only for talk of double-headers shortly after.

Following weeks of speculation, circuit boss, Stuart Pringle finally admitted that the Northamptonshire track was looking to host back-to-back races, and though spectators would not be allowed the Grand Prix would go ahead.

Having allowed hyperbole to get the better of him, Pringle subsequently started to back-pedal, admitting that the event(s) at the circuit were subject to the government's approval. Nonetheless, it was looking positive.

Indeed, with the hosting fee waived, negotiations with F1 saw a deal agreed which would see Silverstone receive an agreed amount aimed not only at covering costs but basically 'renting' the facility and its staff for the event(s).

Then, in a move which should have been made months ago, the government decided to introduce mandatory quarantine for all travellers arriving in the UK, and despite claims that F1 would be one of several sports given exemption this does not appear to be the case.

With just eight weeks before the first of the proposed races at Silverstone was due to take place, everything is up in the air, and despite the fact that Pringle insists he remains "optimistic", most are not, and F1 is already in talks with other circuits, including Hockenheim, with a view to them taking the Northamptonshire track's slot.

Addressing ticket holders in late April, while confirming that the British Grand Prix would go ahead without spectators, Pringle said: "Nothing matters more to Silverstone and our owners, the British Racing Drivers' Club, than taking care of our motorsport fans. Without you we wouldn't exist - it's as simple as that. I would like to reassure you, (that) customers who have purchased a ticket will be given the option of either transferring their booking directly to 2021 or of taking a full refund."

However, it has been revealed that BRDC members who have bought tickets and passes for friends have been asked not to ask for a refund as this would cause the circuit to "lose a lot of money this year".

ITV reveals that in a letter to BRDC members, the club's chairman, John Grant admits that "a number of members have asked 'how badly does the club need the money?'", their concern driven by circuit's accounts which state that "the company relies on cash received from advanced ticket sales to fund its operations".

"There is no question that 2020, after looking promising only a couple of months ago, will now be a very difficult year for the club," writes Grant. "We are fortunate to have entered the coronavirus crisis in the strongest position we have been in for years but, in any likely scenario, we will lose a lot of money this year.

"We currently have cash," he continues, "our bank will support us and, with the help of the government-sponsored furloughing scheme and rates holiday, we are confident we can get through it but, like a lot of businesses, we are having to be very careful about minimising costs and conserving cash."

Grant then calls on the club's members not to ask for refunds on their 2020 tickets and passes.

"If any members who have purchased extra guest passes are in a position to help, it would be very much appreciated if you could ... keep your 2020 passes to support the club's finances", adding that members should request that their "2020 guest passes are exchanged for 2021 guest passes at no extra cost" as opposed to asking for a refund.

It is not known how many members of the public have asked for refunds, but in a worst case scenario - basically everyone wanting their money back - this could mean as much as £29m as the circuit's latest accounts state that the Grand Prix generates "approximately half of revenue," which in 2018 came to £58m.

As we said, a roller-coaster ride for Silverstone, its owners and fans.