UK sport to resume from Monday 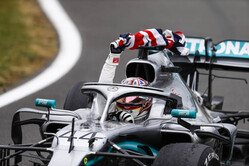 Government minister, Oliver Dowden has given the green light for sport in the UK to resume from Monday (1 June).

The move came just hours after Austria's Health Minister, Rudolf Anschober gave the all-clear for the Red Bull Ring to host the opening rounds of the 2020 Formula One season in July.

Dowden's announcement, which gives the go-ahead for a number of sports to resume, albeit without spectators present, is being seen as a further boost to hopes that Silverstone will host the British Grand Prix.

"Now, for more than two months after sport stopped and after round-the-clock discussions with medical experts and professional sports bodies, I'm delighted to announce today that the government has published guidance which allows competitive sport to resume behind closed doors from Monday at the earliest and, crucially, only when it's safe to do so," said Dowden, the Secretary of State for Digital, Culture, Media and Sport, at the daily coronavirus briefing to the nation.

"It's up to each individual sport when to resume competition; they know their sports best," he continued. "But football, tennis, horse racing, Formula 1, cricket, golf, rugby, snooker and others are all set to return to our screens shortly, with horse racing first out of the gate in the north east next week.

"It's been a huge challenge to get to this point," he admitted. "We've taken a forensic, clinician led approach, working with Public Health England and the Department of Health every step along the way."

It is expected that in the coming days F1 will issue its revised calendar which is expected to comprise between 15 and 18 events.

Though there remains uncertainty over the British Grand Prix - and a second event - at Silverstone, in light of the government's decision not to exempt F1 from the mandatory quarantine due to be introduced in the coming days, it is understood that the government is keen to see the events go ahead.