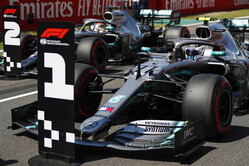 Heading into Melbourne, the coronavirus aside, the sport was expecting fun and games off track in terms of protests and an ongoing row over the FIA's investigation into Ferrari's 2019 engine.

While Red Bull was expected to protest Mercedes dual axis steering system, and others were due to protest (t)Racing Point's version of the 2019 Mercedes, seven teams were embroiled in a row with the FIA.

In a number of exchanges the seven teams admitted "shock" at the "private settlement" and "agreement" the FIA and Ferrari had reached, threatening possible legal action.

The FIA promptly dismissed their claim, and while admitting that the technical aspects of Ferrari's power unit were too complicated to properly investigate, defended its handling of the matter while criticising the teams for questioning its actions in the first place.

The FIA’s World Motor Sport Council then compounded matters by commending the FIA’s handling of the affair.

"The whole thing has left a stale aftertaste," he told Auto Motor und Sport. "For us, it's about a lot of money.

"It makes a difference of $20 million whether we finish second or third in the world championship," he added. "For each of our employees that is also an additional bonus payment, so we cannot just leave it like that."

The seven teams were due to host a press conference in Melbourne explaining the reasons for their action however a call from senior management at Daimler saw Mercedes walk away from the row.

Apparently, at such a critical time, Daimler didn't want to see a political battle that could compromise the sport and its own brand.

Interestingly, it was also senior officials at Daimler who called on Mercedes to jump the gun and call on the FIA to cancel the Melbourne event.

With Mercedes no longer backing the complaint, it remains to be seen if customer teams Racing Point and Williams will follow suit, thereby leaving Renault and the Red Bull teams to go it alone.