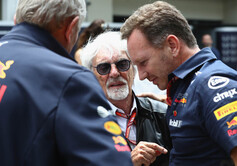 As the Melbourne weekend descended further and further into organized chaos, it was inevitable that some would wonder if former F1 supremo, Bernie Ecclestone would have handled things better than Chase and the gang.

Fact is, Ecclestone, courtesy of his long relationships with the various promoters, governments et al would probably have acted a lot sooner, possibly postponing the first four races as soon as serious doubt first began to emerge.

As for sitting with the teams as they squabbled over who would and who wouldn't race, well, one of Liberty's biggest criticisms of the former F1 boss was his "dictatorial" approach. Ironic therefore, that one of the big issues facing F1, the FIA and the Australian Grand Prix corporation was the layers and layers of bureaucracy they each had to work with.

At such times, one needs a leader, someone who will grasp the situation, take responsibility and make that all-important decision. Like him or loath him, Bernie is such a man.

Just days after Chase Carey was quoted as saying that the previous management of the sport had been "crapping" on it, one has to say that the current management has done a pretty good of dropping F1 in the sh***er".

As the debacle unfolded and the stock price fell further and further, the sport now worth less than when Liberty Media bought it in early 2017, some wondered if Ecclestone might make a bid for the sport. Not so, says the Briton.

"No," he firmly tells the Daily Mail. "If the people at Liberty asked me to run the company I'd say no, 100 per cent.

"It would be a case of trying to dismantle all the things they have put together," he adds. "They have their own way of doing it.

"Chase had allegedly been Rupert Murdoch's right-hand man, which he wasn't, and they thought it would be easy, like a normal business. They have found out it isn't.

"For me, every deal is like buying and selling a used car. Formula One needs a used car salesman."

Though he claims to have no interest in rolling up his sleeves and getting stuck into sorting the mess that F1 currently finds itself in, a mess which, coronavirus and stock market horrors aside, sees the sport without a commercial boss, a communications boss, an overall boss who appears totally out of his depth, no binding commitment from the teams beyond the current season and a rules overhaul unlikely to be introduced as planned, Ecclestone still has an opinion on various aspects of the sport.

For example, unlike much of the media, the 89-year-old does not believe Lewis Hamilton would be best suited by heading to Ferrari.

"If I were Lewis I would stay at Mercedes,' he says. "He is comfortable there. He is in charge. He's got the guy who turns the lights on and off supporting him," he adds, a clear reference to Toto Wolff.

"It wouldn't work at Ferrari for him," he continues. "They are Italians. He would have to really learn the language so he'd know what they were saying behind his back, for a start.

"The problem with all the Italians, they don't want a fight, don't want an argument with anyone. Instead of saying to someone who is doing a bad job, 'Sort yourself out or I'll sort you out... please yourself, but I want results', they say, 'Let's have dinner so we can talk about it. Be friends'.

"If I were a team boss I'd sign Max," he admits. "He's quick and easy to deal with. If I had Lewis I'd just tell him what time the next race starts and say be there for then. Apart from that he could do whatever he wants. I'd cut his pay and let him do his own sponsorship, anything. Mercedes try to rein him in a bit. I'd give him total freedom.

"He is looking for what he's going to do when he stops racing," he says of the six-time champion. "Fashion, music, all that. I think Lewis is not sure of himself in general and that extends to his driving, when he wants to know what sort of time his team-mate is doing or what's happening with the Ferrari guys. He's not terribly confident.

"There is no need for him to worry about winning one more championship than Schumacher," he adds. "If he wants to stop racing, he should not carry on just for that reason. He should carry on because he wants to drive."

Asked who he rates as 'the greatest', Ecclestone replies: "Alain Prost...

"He never got a lot of support from the team," he continues. "They didn't get all that much help from the pit wall, either. The lights went out and he was on his own. He had to look after the tyres on his own, the brakes too, and he was bloody quick. He nearly won two more championships. That would have been six but the figures are immaterial.

"I'd also say Nelson (Piquet), who did well in a car that was OK. Stirling you'd have to say yes to the top four, and Fangio... he got the job done.

"Lewis is very good," he adds. "Top four or five, or whatever, but it is hard to say this guy is better than so and so. Lewis has the best equipment and best team. The best everything."

And Sebastian Vettel, with whom he has a close relationship.

"He did a sh***y job and I told him so," says Ecclestone. "He finished where he deserved. Ferrari favoured Leclerc, 100 per cent. They fall in love with a driver there and it is hard for the other guy. A lot of things went on against Sebastian.

"I think we have seen the best of Leclerc," he adds. "He has done well and will continue to do so but I don't think we'll see anything spectacular.

"The business in Canada upset Sebastian... he thought Ferrari should have backed him more and got stuck in. He's right."

And talking of Ferrari, Ecclestone believes that Mattia Binotto is not the man to lead the Maranello legends forward.

"They need someone in there who can make people understand that when you say something it happens. Not maybe. Or a discussion," he says.

"I would have got Flavio Briatore to run Ferrari," he continues, referring to his good friend, who was banned from the sport for his involvement in Crash-gate. "Flavio would do what he always did with Benetton and Renault: he'd steal the best people from other teams. The problem is that in the end Flavio would have let people think Ferrari belonged to him."