2021 rules overhaul likely to be postponed 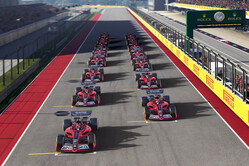 As a result of the ongoing coronavirus Formula One is now in crisis, in more ways than one.

With Formula One Management already finding it difficult to reschedule the postponed Chinese Grand Prix, it faces an even tougher hurdle in seeking to find slots for the forthcoming races that are likely to be postponed also.

Though there is no official confirmation as to whether Bahrain will happen, it's understood that the teams have agreed to place their staff in quarantine until the end of the month, thereby ruling out the second round of the championship.

With Vietnam also certain to be postponed, it's understood that the Dutch, Spanish and Monaco Grands Prix will also be called off in the coming days, leaving Azerbaijan as the potential season opener.

Finding new slots for so many races - and that's assuming the virus eases - would be near impossible so there is talk of extending the championship into 2021.

This would in turn mean delaying the proposed rules overhaul until 2022 or even later.

"At this point our focus really is dealing with the issues this weekend," Chase Carey told media in Melbourne. "Clearly, I just came in from Vietnam, so we are in discussion with partners on the upcoming races.

"At this point what we really want to do is make sure we deal with the issues here, and deal with them properly," he continued. "But in the coming days, clearly we will be addressing the events yet to come.

"We just have to continue doing what we're doing, reaching out to everybody, every expert, we can around the world. Clearly we're a global sport. And therefore, you know, we're not just dealing with a single country issue, we're dealing with an array of complexities. But I think we have to continue to deal with those as the situation evolves."

Note that due to the complexity of the various agreements, and not forgetting Lewis' claim that "cash is king", though the Melbourne event was ‘cancelled', China, and those that follow, will merely be postponed. It's in the wording.