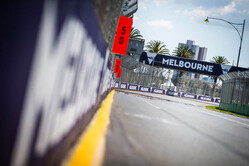 Without assuming an annoying "told you so" stance, the fact is that some were very much against F1 heading to Australia at a time the coronavirus was on the cusp of being deemed a pandemic. For reasons best known to themselves however, F1, the FIA, the teams and much of the media headed to Melbourne.

That the event would go ahead was always seriously in doubt, indeed some felt the sport was taking a deadly risk, for if the virus found its way into the paddock the race, the season, the very sport could be put at risk.

Around the world all manner of businesses, sporting organizations and governments were taking drastic steps, but F1 - insisting that it was taking all precautions, courtesy of its team of experts - carried on.

At 11:23 (GMT - 22:23 local) on Thursday, McLaren announced that it was withdrawing from the event after a team member was tested positive for the virus.

It was at 23:20 (GMT - 10:20 local) that F1, the FIA and the Australian Grand Prix Corporation announced that the event had been cancelled.

In that 12-hour gap, the teams had held a meeting at which initially they were split 5-5 on whether the race should happen. Daimler eventually pulled the plug on its teams - Racing Point having been keen to press ahead - leaving the Red Bull teams as the only outfits still keen to race.

As the results of the meeting filtered out, sections of the media began reporting that the race was off. The first of these reports was at 16:07 (GMT - 03:07 local) courtesy of Autosport, with Reuters repeating the claim at 17:16 (04:16).

Despite this it was six hours before F1, the FIA and the AGPC made their official announcement.

By that time, a number of teams were already packing up, Lewis Hamilton, Sebastian Vettel and Kimi Raikkonen had left and fans were still arriving at the track only to be refused admission.

By any stretch of the imagination this was farcical.

"There was consultation with the teams, the medical authorities, the FIA and the promoters here," F1 MD, Ross Brawn told the official F1 website, in terms of the 12 hour delay in cancelling the event after McLaren had withdrawn.

"I've been up all night," he added. "We had so many issues to work through. We had to get the teams together again and hold a meeting. It all takes time.

"It's not a total autocracy," he continued, "as in we just can't make a decision. We have so many factors to take into account. I think we did a pretty good job of reaching the right conclusion with so many stakeholders involved. We're talking to the FIA, which is in Europe on a Europe timezone, and we had to speak to Jean Todt.

"Chase unfortunately was in the air, flying between Vietnam and here. So it was a pretty stressful period. Considering we dealt with everything in 12 hours, for something that important, was good."

Asked why F1 went down under in the first place, he said: "We were very keen to have the race. It's a very positive event. We wanted to kick-start the season. It is a great race with great fans and a wonderful weekend. We have a big impact on the economy here and it has an impact on our economy as well.

"Formula 1 has to function, we have to make it work so we looked at the whole situation and when we decided to go, we looked at the different dynamics. Probably what has surprised everyone is the rapid expansion of this problem. The escalation of new cases, certainly in countries like Italy, where it's gone almost vertical. No one could have expected that."

"I have spoken to Mattia Binotto many times in the last few weeks," he continued, "his mood changed in the last five or seven days, from what he was seeing in Italy. So we were on this ship that sailed and we were optimistic we could get through it, that we could get Formula 1 started and just bring a bit of relief in difficult times.

"Once we had the positive case, once one team couldn't race because of that, clearly we had a problem we needed to address.

"We had mapped out with the health authorities what would happen if we had one case, five case, ten cases," said the Briton. "But what you never know with those cases is what the association is with the people around. Having one case with 14 people having to go into isolation, that effectively knocked that team (McLaren) out of operation.

"If that one case had been someone with a different profile, different responsibility, it might not have impacted a team that much. There are certain things you can spend forever predicting and you'll never know what is going to happen. In reality, we found the case, the person who was positive in the paddock. That is the credit to the authorities. They were identified, they were tested, the procedures worked."

As the teams leave Melbourne it is unclear where they are heading. Under normal circumstances they would have headed straight to Bahrain, but these are different times.

It is widely anticipated that Bahrain will not now happen. Indeed, Vietnam will not happen nor Zandvoort, Barcelona or Monaco, with talk that the season will (hopefully) begin in Baku.

"I don't think anyone has experienced (a situation like) this in their lives," said Brawn. "I've been through financial crisis, dramas and the scale of this at the moment is massive.

"We are taking stock of the situation now and what we have learned from this weekend. We have to be realistic about when that can start again, which is what we're working on at the moment.

"We have plans to rebuild the season and try and accommodate as many of the lost races as we can.

"I think people have to show some tolerance now in terms of how we build the season, for the rest of the year. I think the team is in the right place to realise that is necessary."

While one can understand the lack of tolerance from the fans left queuing at the gates in Melbourne, or those members of the media and F1 team crew virtually forced to attend, it remains to be seen the tolerance shown by promoters, sponsors and broadcasters, not to mention the teams as the money dries up.

Less races means less money, for F1 and the teams, and that in turn means less money for development which will no doubt lead to the postponement of the 2021 regulations and the budget cap.

Rest assured, this is far bigger than simply dropping a race from the calendar.

And, despite Brawn's assurances, one cannot say with any degree of confidence that Chase Carey's is the hand one wants to see on the tiller as the sport heads into some very stormy seas.