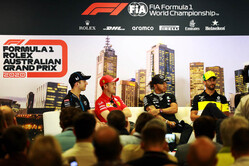 Now, it's been a complicated build-up to this first race of the season, so I'd like to start just by asking you about your preparations. Daniel, what have you been up to and why is it so difficult for an Australian at home. It seems that this race track, there's not much love between Australian drivers and Albert Park?
Daniel Ricciardo: I guess there haven't been many Australians, so like the statistics... It's a game of percentages, right? But anyway, I hope this one is good. I feel like one year's good, one year's not, but I think I'm due a good one. I've been preparing, been preparing well. I don't know how to sit; everyone's trying to sit away from each other. We'll get cosy. What have I been doing? I don't know, just the usual. Since testing: back in Europe, bit of simulator stuff, and then I was home for a few days. It's good to be here.

How about the motor - the new car? What did you learn about it in testing? Do you feel you can make a step forward from last year?
DR: Yes, I do. I think the test ended well for us. Day three of week two was a lot more promising and both my feedback and Esteban's, you could see our expression when we got out of the car, it was certainly a lot more optimistic, so that was encouraging. I just look back at last year, the whole build-up and everything. I was watching some onboards before and I don't know, I can just see me from the outside and I'm like, “yeah, I'm a lot more comfortable in this car now”, so I'm looking forward to seeing what I can do.

Let's move on to the baby, Nicholas Latifi, your first grand prix this weekend. Just describe how you feel? An emotional moment, I guess?
Nicholas Latifi: Yeah, definitely very exciting. When I was first announced as the race driver last year this weekend seemed so far away. But day by day, going through all the winter preparations and everything, just kind of closing in on this weekend. Yeah, a lot of anticipation from myself and from the team as well, but yeah, really just happy and grateful to be here and just can't wait to get the weekend underway.

And more nerves than last year when you were in Formula 2?
NL: Right now, no, I would say there are not really any nerves at the moment. I've kind of said that from already starting winter testing as the official race driver, for me it just felt like a continuation of the work I was doing with the team last year. I was already really comfortable in the team environment. To be honest, all the stuff that made it feel a bit more like I was the race driver was all the external - all the media, the fan interactions, it's just at so much more of a higher level. Right now everything is still calm. Maybe once I'm waiting on the grid and the lights are about to go out, that's probably when I'm going to notice...

You make a reference to the work you were doing with Williams last year, you did six FP1 sessions, so you knew about last year's car, you drove it. How much of a step forward is this year's car?
NL: It's definitely a step forward. It's difficult to quantify how much, because it's always the same in winter testing, you never really know what people are doing with engine modes and fuel levels, but just from my first feeling in the car it was definitely much nicer to drive, giving the driver much more confidence to push and attack the corners, which is what you want. We're going to see come Saturday where we are in the pecking order. We're optimistic it definitely is a step forward but we're just going to have to wait and see just how much.

Well, good luck with that. Sebastian, talking about differences from last year to this year. From the outside winter testing back in Europe looked a little bit inconclusive for Ferrari. What can you tell us about it?
Sebastian Vettel: I think testing is always inconclusive. You never know where you are and that's the good thing about coming here and [we can] finally get going and racing. I think testing has, not a lot, but it does have its nice sides, aspects, but really racing is what it's about, so as I said, it's nice to come here and finally know where you are.

But like Nicholas and Daniel, can you say that this year's car is a clear step forward?
SV: It is but I think that's probably true for everyone. That's the idea of having a new car, obviously learning from the experiences of the year before, so I think it's true to say that everybody had got a better car this year, but it always depends on where you are relative to the others. So I think our car is doing what we expected. It is a step forward, it feels better, but ultimately it matters where you are next to all the others.

Well, you've always gone well here at Albert Park, you're going for victory number four this weekend. What is it about your relationship with this track? Why do you go so well here?
SV: I don't know. I don't know anybody who doesn't like the track. I think it's a fun track and generally it feels like the right place to kick it off, great atmosphere. Maybe my biggest advantage is that I'm not Australian. And Lewis as well. I think Lewis has done really well here as well. No, because you opened up by saying that Australians haven't done really well here!

DR: The irony is my best year was the year you had an Australian, but then that got taken away.

SV: I don't know; I was trying to joke. I know, I'm German, so it's probably not what you expect. I think everybody just loves the track and that's myself included. I think it has a nice flow to it, a nice rhythm. It's good that they didn't resurface much of the track, keeping some of the bumps, some of the nature of the track. I think it's quite fast, considering it's a semi-street circuit. Yeah, I like it.

Thank you. Lewis, coming to you, before we talk about track stuff, I just wanted to ask you about your detour on the way here to New South Wales. Tell us what you were doing up there and what you found?
LH: Yeah, I got here on Monday morning and went straight from the airport in Sydney out to the Blue Mountains and got to see... Through the winter I was watching the news and seeing the devastation out here and how it was affecting people but more so than anything how many animals that perished. That, for me, was too big a number to even comprehend. I wanted to get out here before that but it just wasn't possible and I was like 'when I first get here I want to go and see it first-hand for myself'. So, I landed, took a two-hour drive up to the Blue Mountains and slowly started to see a lot of the burnt trees, the forest, as far as the eye can see. A really beautiful place. There was already regrowth, but I went to visit an organisation, Wires, that was helping during the whole period, whilst the animals were suffering, while the fires were going on, and they are helping rehabilitate some of the animals. It's all just people living in local homes around the area who volunteer and so it was really quite amazing, they are the heroes. It felt amazing to see it for myself and see all the hard work that has been done and it meant a lot to them, the people that I met, that we took the time to go out.

Daniel, were you here in the height of summer when the bush fires were at their worst?
DR: I was. I was home, but home for me is Perth, so west coast. We weren't affected, nothing to the extent of the east. For me to be at home but to see the engagement from the whole world, from all over, that was really nice. It was affecting our country, my country, and to see the generosity from everyone, from all parts of the globe, that was a really good touch.

And Lewis, just on the on-track stuff, you completed more laps than anybody else in winter testing, how confident are you coming into this race?
LH: I don't really ever use the word confidence. I think we just worked as hard as we could. The runs went well or the days went well in Barcelona. We did leave with reliability issues, which I know the guys have been trying to move mountains over the past couple of weeks so we arrive in the best shape possible. So I truly believe in all the hard work we've done. We're hoping we start off on the right foot. I think we arrive here with two less days of testing compared to last year. I think we've got quite a good grip on the car and we arrive as best prepared as we can be. As Seb was saying, it's going to be interesting to see where we all stand, but that's the exciting part of coming to your first grand prix.

(Frederic Ferret - L'Equipe) Question to Lewis: with the winter testing, is there some driver and some car you may see as your main rival for your title?
LH: Force India, maybe?

LH: I don't call it Racing Point, because I don't like the name! I prefer Force India. No, I think it's the same - Ferrari and Red Bull. I think Red Bull have been particularly strong so I don't really know where they stand between them, but Red Bull were realty strong particularly at the end of last year. Obviously Ferrari have taken a little bit of a step, it seems they may have... they have definitely taken a bit of a step back power-wise, but maybe the car is better, so we'll see tomorrow when we get in the car over the next couple of days how that plays into effect.