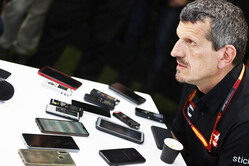 This means the American outfit, which has close ties to Ferrari, now has four team members under investigation, while McLaren has one.

"We should get the results in the afternoon," said team boss, Guenther Steiner. "Until then, I don't know anything, I don't want to speculate. I'm not a doctor. Hopefully they come back negative and we keep on going like we want to."

It's understood the four team members involved are an engineer and three mechanics.

Asked what will happen if the test results come back positive, Steiner said: "We'll cross that bridge when we get to it, but I think we are just waiting to get the result. I hope they are negative, but who knows.

"Alternative plans are difficult because nobody can come here anymore, not time-wise and not permit-wise," said Steiner. "We need to come up with something. In racing you always find solutions, but first I want to have a problem before I find a solution."

Amidst growing concern, the chief health officer of Victoria, Brett Sutton told SEN radio, that the tests were being fast-tracked.

"If they are all negative, and if everyone else who has got symptoms is negative and haven't exposed other crew, then I can say that they can carry on," he said. "But if they are positive crew and they've exposed a number of others then all of those contacts need to be in quarantine, and so it'll be a question of whether they've got the operational staff to continue.

"I've spoken to my team about getting those test results as soon as possible. It's really all contingent on that. If there are positive tests then I'll be directly involved with the with the organisers around what next steps need to be taken and what the implications are."

Increasing fears within the paddock have led to teams changing their schedules, particularly when it comes to the traditional TV media scrums, while also closing their hospitality units to all except team members and invited guests.

Rather than the various broadcasters interviewing drivers, TV broadcasters, F1's own unit alone will carry out the interviews and make them available to all.

"Due to the situation with COVID 19 the team will be taking the necessary precautions," said Williams. "There will be no open TV sessions for the duration of the weekend, however Formula One will be recording English language interviews with Claire Williams, George Russell and Nicholas Latifi across the weekend. These will be made available to all broadcast media. Our open print sessions will continue to be held, but these will take place outside the team's hospitality and be managed accordingly.

"In view of the current situation, the team has had to take the decision that the hospitality unit will only be accessible for team members and invited guests."