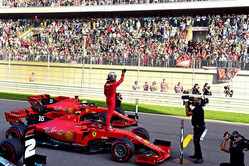 Scuderia Ferrari secured its seventh pole of the season, the sixth courtesy of Charles Leclerc, who was the only driver to get under the 1m 32s barrier at Sochi Autodrom. Tomorrow the two SF90s will be in line astern on the grid, after Sebastian Vettel qualified third for the second race in a row, in both cases just behind Lewis Hamilton, by 29 thousandths in Singapore and 23 here in Sochi. This was Scuderia Ferrari's 226th pole and, for the first time since 2008, the team has secured more than six poles in a season. Charles is the first Ferrari driver since Michael Schumacher to take four consecutive poles, the German having done so in Italy, the USA, Japan and Malaysia in 2000.

Mixed fortunes in the first part of qualifying, Charles immediately posted a good 1:33.613 on the Medium tyres, however Sebastian made a mistake in the third sector which meant he lifted off and aborted the run. From then on things got complicated, as on two occasions, as he tried to put in a quick lap, the yellow flags came out, because of incidents involving first Kubica and then Albon, which meant he had to lift off again. The Thai driver's encounter with the barriers eventually brought out the red flag so that Sebastian had to make one final run on Soft tyres to easily make the cut to Q2 with a 1:33.032.

In this final session, Charles and Seb were able to run two sets each of Softs. On his first attempt the Monegasque stopped the clocks in 1:31.801, while the German did a 1:32.135. After changing tyres Charles got down to a 1:31.628 and Seb improved to 1:32.053, again just pipped by Hamilton by the smallest of margins.

Charles was presented with the mini Pirelli tyre given to the man who is on pole by Robert Shwartzman. Earlier in the day, the Russian Ferrari Driver Academy student clinched the title in the Formula 3 championship with one race to go in the series. The race was won by fellow FDA driver Marcus Armstrong. Keeping it all in the family.

Charles Leclerc: "The car was amazing to drive and the team did a great job anticipating the track evolution and setting up the car in the best way. We are just focusing on ourselves and the work we are doing seems to be slowly paying off. On my side, I continue focusing on the negative and working to improve and learn as much as I can.

"The lap in Q3 was great, apart from when I lost the rear a bit in turns 16 and 17. I'm still happy to end the day with a result like this, but I am already fully focused on the race now.

"Our race pace was good in FP2, which is a positive sign. We will start the race on different tyres to our competitors, but I don't think that there is a huge difference between the soft and medium compounds in terms of their degradation. It will be difficult and crucial to keep everyone behind at the start, because it's a long way to turn two. I will give it all I've got."

Sebastian Vettel: "Overall I was reasonably happy with the car, but not entirely satisfied. Q1 was a bit complex as I made a mistake on my first attempt and then I was slowed by two yellow flags. I found it difficult to get into a clean rhythm, especially towards the end of Quali, when it was vital to extract the absolute maximum out of the car.

"However the race is tomorrow and I am confident. We need a good start and then we can think about the rest of it. We start on the clean side, on the Softs while the Mercedes are on Mediums and being on different tyre strategies will make for an interesting fight. I believe we have made the right tyre choice for the start and I think we have an advantage over our rivals down the straight, so a tow might come into play."

Mattia Binotto Team Principal: "We are very happy with the way qualifying went. Already yesterday we realised that our car was quick and today we delivered the result. Once again, Charles produced a good lap, even though he made a couple of small mistakes, which means he had the potential to do even better. It has to be said that the track surface here is very smooth, so it's easy to make a mistake.

"Seb qualified third, which might actually be better than second when it comes to tomorrow's start, even if it would have been nice to have locked out the front row.

"The SF90 has improved and we have accelerated our development to have more drag and aero downforce. Also, thanks to the new package, we now lose out less in the corners and the overall balance is good.

"As for the race, the key moment will probably be the start and another important aspect will be the fact we are starting on a different tyre compound to our competitors."