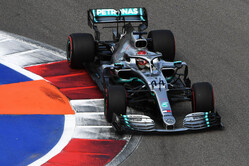 Despite the fact that Lewis Hamilton dug deep today, thereby putting his Mercedes on the front row for tomorrow's Russian Grand Prix alongside Charles Leclerc, there was no hiding the obvious frustration of team boss, Toto Wolff as Ferrari claimed its fourth successive pole.

While widely expected to do well at the powers circuits at Spa and Monza, the Italian team caught everyone off guard with its superiority in Singapore.

Just a week later, on another circuit where, theoretically, the SF90 should be struggling, once again Ferrari appears to have the upper hand.

"We are losing seven to eight tenths on the straight, and that's quite a massive amount," the Austrian told Sky Sports. "It seems to be like the perfect package."

"It was a tough session because these guys have some crazy speeds on the straight," said Hamilton. "They go to another level... that old party mode you talk about, they have something else beyond that... 'jet mode'.

"Nevertheless, I gave it absolutely everything I had at the end," he continued. "And the team did such a great job to tinker and push forward.

"I am so glad it came together, I wasn't expecting to get on the front row so I am really happy with it nonetheless."

Though Ferrari might have the benefit of 'jet mode', Hamilton is hoping his team's strategy of starting the race on mediums will reap dividends.

"We know they are on a slightly lower drag level this weekend, plus they have that power, so we have to try something," he said. "You see the last couple of races we were behind all the way, so we were fortunate enough to opt for another strategy.

"I think the team has done a really good job to put us in that position. It is a long way down to Turn 1, so not always the best for starts on the harder tyres.

"I am going to try to tow the life out of Charles if I get the chance. But it is going to be hard because they have got good starts as well."