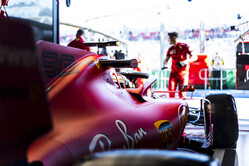 There's no way to dress this up, but the fact is that Mercedes really is struggling this weekend.

While we have grown used to Lewis Hamilton complaining about his tyres and questioning the strategy, to hear him ask during this morning's session how he was meant to make up the 1.1s gap to Charles Leclerc was something new.

OK, so he subsequently closed to within 0.396s of the youngster, but that required the Briton pulling out all the stops.

Even Valtteri Bottas, who clearly revels in this track is struggling.

Max Verstappen looked to be repeating his form from yesterday and pulling a banzai lap out of nowhere, but an off and a subsequent spin meant the Red Bull driver never got closer than 1.49s of Leclerc's best.

Sebastian Vettel has driven a few good laps, but every time his young teammate had the answer, and the German veteran is going to have to dig deep if he wants to repeat his Singapore success.

The midfield is as intense and hard to predict as ever, with Hulkenberg, Norris, Magnussen, Gasly, Ricciardo, Sainz, Giovinazzi, Perez and Stroll all covered by less than half-a-second.

Sadly, Daniil Kvyat's weekend gets worse with every passing moment, an engine issue early in FP3 meaning the team will need to change his engine (again) and as a result he will not participate in qualifying for his home race.

With Mercedes not having started from pole for the last four races, the pressure is on, especially as this weekend comes of the back of three straight wins for Ferrari. Since the hybrid formula was introduced in 2014, the German manufacturer has never lost four races on the trot.

Ahead of Q1, the air temperature is 22.2 degrees, while the track temperature is 31.2 degrees. The dark clouds that threatened earlier - and dumped loads of rain overnight - have seemingly moved on.

The Ferrari pair are among the first out, and while most are sporting softs, Leclerc and Vettel are on mediums.

Russell posts a benchmark 36.201 and teammate Kubica 37.304, and while Vettel looks set to smash this he aborts the lap in the final sector.

Albon aborts his lap when the yellows are waved after an off for Kubica. Indeed, a number of drivers had their lap compromised, including Vettel.

A 33.230 sees Hamilton go quickest, despite only being quickest in the final sector, like Verstappen, who goes second (33.638), he is on softs.

Hulkenberg goes sixth with a 34.236, ahead of the McLaren duo, Ricciardo and Grosjean.

Gasly takes a rough ride over the sausage kerbs.

As Leclerc goes quickest in S1, the session is red flagged after Albon goes off and into the barriers at Turn 13. Replays shows he simply carried too much speed into the corner.

Once again, Vettel has his lap compromised through no fault of his own.

All of which means that Albon will start from the wrong end of the grid, while Verstappen already faces a 5-place demotion.

With the clock stopped with 6:38 remaining, along with Albon and Kvyat, Vettel, Kubica and Russell comprise the drop zone, with Gasly, Giovinazzi, Stroll and Raikkonen hovering.

Thirty seconds before the green light, Vettel heads out, Ferrari aware that another stoppage could be very, very costly. He has switched to the softs.

As Vettel begins his hot lap, the only other driver on track is Kubica.

While Leclerc stays put in his garage, the Mercedes pair are back out on fresh softs.

As was the case in Monza, a number of teams send out their drivers at the last possible moments and as a result they are jostling for position.

"Did we not learn from last week," asks Russell. Indeed.

Understandably, while a number of drivers look set to improve, quite a few are not.

Norris goes seventh, but is demoted when Sainz and Magnussen go quicker.

Giovinazzi improves to 15th, which drops his teammate into the danger zone.

Ricciardo goes seventh as Raikkonen aborts his extremely scrappy lap and thereby fails to make the cut. The Finn makes his frustration clear with some typically colourful language.

Q2 gets underway and the Mercedes pair are first out, both on the mediums.

Verstappen is on softs as are the Ferrari pair.

Gasly also demoted the Mexican as he goes sixth, with Norris going eighth ahead of Hulkenberg and Sainz.

Neither Haas driver makes it into the top ten on their first run, with Giovinazzi, Ricciardo and Stroll joining them in the drop zone.

Leclerc complains of "a lot of oscillations".

With 3:30 remaining, the drivers start heading out for the final attack. The Mercedes pair now on softs.

Stroll, who was first out, looks set to improve, but so too do Perez and Norris.

The Canadian fails to improve in S2, while Vettel goes quickest in S1.

Norris and Grosjean both improve in S2, as Gasly runs wide.

As Vettel posts a PB in S2, Leclerc goes quickest in S1.

Grosjean goes sixth, as Vettel consolidates second with a 32.536.

Ricciardo can only manage ninth, as Gasly pits.