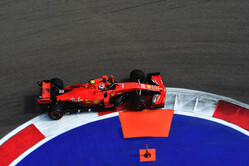 Ahead of today's sole practice session, the air temperature is 21.8 degrees C, while the track temperature is 27.5 degrees. There is a 60% chance of rain, with lots of the stuff falling throughout the night.

The big news today is that McLaren is to use Mercedes engines (again) from 2021, leaving Renault supplying just one team - that's assuming the French manufacturer remains in F1.

Max Verstappen - who incurs a 5-place grid drop after Honda introduced its latest spec engine - was the pace-setter in FP2 yesterday however, Ferrari appears to have the edge in terms of race pace.

As for Mercedes, while Lewis echoes Toto Wolff in suggesting that the German team is now the underdog, you write the Silver Arrows off at your peril. Since F1 came to Russia Mercedes has won every edition of the race, and is likely to be in the midst of the fight throughout the weekend.

The lights go green and Norris gets things underway, followed by Albon, Gasly and Kvyat.

"There's a very strong noise when I downshift," reports Kvyat, who is having a torrid home race weekend.

While most are on the softs, Hulkenberg and Raikkonen are on hards.

Surprisingly, despite the threat of rain, there is no eagerness to get out on track, indeed a number of drivers aren't even in their cars.

Thirteen minutes in, as Norris is the second driver to post a time (35.775), the Mercedes pair head out.

Quickest in the first two sectors, a scrappy final sector sees Bottas go second with a 35.786.

Hamilton leapfrogs his teammate with a 35.725, but is demoted when Vettel bangs in a 34.515, having been quickest in the first and final sectors.

That said, Leclerc responds with a 34.147, the Monegasque only quickest in the final sector.

A 35.803 sees Grosjean go sixth, ahead of Magnussen, Albon and Giovinazzi.

Verstappen, one of 9 drivers yet to post a time, finally heads out.

More misery for home boy Kvyat, who has stopped on track for the second time this weekend. "Engine, engine, an engine problem," reports the Russian.

"We are losing massively on the straights, comparing yesterday," reports Raikkonen.

The VSC is subsequently withdrawn, and Leclerc wastes no time in improving to 33.906.

Verstappen goes fourth with a 34.837 as Hamilton takes full advantage of the run-off at Turn 5.

While the Bulls are on mediums, the rest are on softs.

Both Mercedes drivers visibly struggling, indeed both McLaren drivers are ahead of Hamilton on the timesheets.

"Have I got time for a double cool-down," asks Hamilton.

On those mediums, like yesterday, from out of nowhere Verstappen produces a 34.355 to close to within 0.449s of Leclerc.

PBs in the first two sectors, Verstappen loses time in S3, nonetheless he improves his time (34.227) if not his position.

Hamilton goes fourth with a 34.318, the Briton posting PBs in the final two sectors.

Hulkenberg goes sixth and Ricciardo seventh, ahead of the McLaren pair.

After 35 minutes, we've yet to see a time from Perez, who has only completed 2 laps.

Kvyat's car finally arrives back in the pits.

In the opening sector, Bottas can only manage a PB, the Finn posting another PB in S2. At the line it's 33.354, which leaves him 0.493s off the pace, despite being quickest in S3.

Leclerc asks if he can do two cool-down laps. The team isn't sure there will be a "big advantage".

All eyes on Hamilton, who posts a PB in S1. As he posts anther PB in S2, Leclerc goes quicker again.

Back on track, Perez has a massive lock-up in T13 and destroys his tyres.

Kvyat's weekend goes from bad to worse with the news that he will need an engine change and may not be ready in time for qualifying.

"We can confirm Dany pulling over was due to a power unit issue," says Honda. "We'll be fitting a brand new Spec 4 PU to be best prepared for tomorrow's race."

Both Haas drivers post PBs in the opening sector, as does Hamilton. However, while the Haas duo maintain their pace, Hamilton appears to abort his lap.

From Norris (sixth), to Stroll (sixteenth), barely half-a-second covers them.

PBs in the opening sectors for Verstappen, but he aborts the lap in the final sector, after running over the kerbs in Turn 13 and then pits after spinning in Turn 2, the Red Bull driver lightly touching the barriers with the rear of the car.

In the meantime, Perez has gone 15th with a 34.860, the Mexican suffering another major lock-up.

Grosjean is a mere passenger as he runs wide and along the sausage kerb like a monorail. What's it called... monorail... monorail.