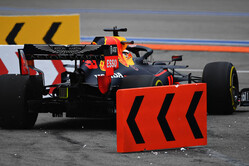 Ahead of today's second session the air temperature is 23.7 degrees C, while the track temperature is 30 degrees. Though still a little overcast, the threat of rain has receded, though we are expecting rain tomorrow and Sunday.

Charles Leclerc set the pace in FP1, with Mas Verstappen digging deep and producing a best time just 0.08s off his pace.

Though the Mercedes pair were fourth and fifth, both over 0.7s off the pace, unlike the opposition the Silver Arrows never tried the soft tyres, instead sticking with the mediums.

Though there were a number of lock-ups and a few spins, it was only after the session ended that there was an incident of note, Daniel Ricciardo spinning and dislodging his rear wing after clouting the barriers. This came moments after the upper element on Valtteri Bottas' rear wing appeared to collapse.

Already down to start the race from the back of the grid, there was further frustration for Daniil Kvyat when the Russian suffered a loss of power and was force to sit-out the majority of the session.

In the moments before the start of the session, work continues on Bottas rear wing. Indeed, Hamilton's wing has been replaced.

The lights go green and Norris gets things underway. He is followed by Kvyat and Sainz.

Norris posts 36.170 on the mediums, and as more drivers head out there's a fair mixture of compounds though only the Williams pair are on softs.

"I had anti-stall on the kerb," reports Kvyat.

"Do not press recharge," is told, "I've already pressed it," he responds.

Vettel aborts his first flying lap after running wide. He completes a further couple of cool-down laps before cranking it up and posting a 34.306.

Bottas goes third with a 34.954 as Hamilton and Verstappen head out.

Running wide at Turn 2, Bottas is confused as the slalom is missing one of its marker boards after a Racing Point obligingly ran over it.

The VSC is momentarily deployed in order that the markers can be put back in place.

"Why does it smell so bad," asks Hamilton, though it is unclear what he's referring to.

Smell or no smell, Hamilton goes fourth with a 35.086, he is on the mediums, while teammate Bottas is on hards, possibly the tyre for Sunday afternoon.

As ever, the Red Bulls fill the air with sparks.

More drivers join Bottas in switching to the hards, and as they push ever harder, so the mistakes begin to creep in.

Verstappen goes fourth with a 34.812, leapfrogging Hamilton in the process. Next time around the Red Bull driver leapfrogs Bottas also with a 34.394.

The Dutchman's progress is halter however when Hamilton claims third with a 34.393.

With 53 minutes remaining, the Ferrari pair are among the first to switch to softs. Raikkonen, Perez and Kvyat also switch to the red-banded rubber.

Unsurprisingly, Leclerc is quickest in S1, maintaining the pace in S2. At the line he posts 33.497, only managing a PB in the final sector.

Vettel can only manage a PB in S1, though he's only 0.001s off his teammate's pace. He subsequently aborts the lap, having encountered traffic.

Following a cool-down lap, Vettel cranks it up again and immediately goes quickest in S1. However, a ragged S2 is followed by a PB in the final sector. He improves, slightly, but remains 0.704s off his teammate's pace.

As Verstappen switches to the softs, the Mercedes pair alone continue to tantalise by sticking with the medium (Hamilton) and hard (Bottas).

Quickest in S1, Verstappen posts a PB in S2 before going quickest again in the final sector. A 33.162 sees the Red Bull driver go quickest by 0.335.

A lock-up for Grosjean in Turn 2, sees the Frenchman take to the slalom.

All eyes on Hamilton, who finally makes the switch to softs. A PB in S1 is followed by another in S2, but he's already significantly off the pace. At the line he posts 34.153, which puts him 0.991s off the pace.

In the Red Bull garage Albon's car is up on its stand, and the look on the driver's face suggests he's not going anywhere anytime soon.

Bottas begins his first flyer on the softs. Like his teammate he starts off with a PB, following up with another in S2. At the line he posts 33.938 to go third, albeit 0.776s down.

With Albon sidelined, behind the big five, it's: Gasly, Perez, Hulkenberg, Stroll, Norris and Kvyat.

Along with the Williams pair, at the wrong end of the timesheets we have Giovinazzi, Albon, Sainz and Grosjean.

Woah! The Toro Rosso pair almost take one another out in a heart-stopping moment. On the pit-wall, Franz Tost looks less than impressed.

"That was really stupid," complains Gasly. "Sorry I didn't see him," says Kvyat.

Raikkonen takes the slalom run-off like a pro, as Verstappen and Leclerc continue their sims, both now on the medium rubber.

"These kerbs are dreadful," complains Russell.

Another heart-in-mouth moment when Hamilton, at full tilt, comes up behind a very slow Albon, who has only just returned to the track.

That had the potential for disaster. Quite how the Briton avoided the Toro Rosso will remain a mystery to us mere mortals.

On the evidence thus far, Red Bull is strong on one-lap pace, but on the longer runs the Ferraris have the edge.