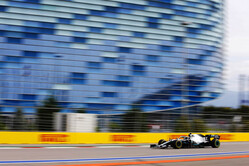 Valtteri Bottas: It's always good fun to drive on this track, but unfortunately the others were a bit too quick for us today. The balance of the car felt good, I was just struggling with the overall grip. Everything else seemed ok, but obviously we need to find some gains if we want to be in the fight for pole tomorrow. We will review the data tonight to see what we can do better. Tyres are key for a good performance on this track and we need to try and extract more from the Soft tyres on a single lap, but our performance on the Medium and Hard tyre looked relatively decent. I hope for rain tomorrow, I think we might have a better chance in a wet qualifying.

Lewis Hamilton: It's been a day of discovery and exploring. It started off not too bad and while we've been improving, the others made some big progressions and improved much faster than we did. Our pace was a little bit better in FP2, but still not where we want to be. We'll work very late tonight to understand what we can do better and make some changes to the car for tomorrow. It's good to see the competition doing so well, but naturally we want to be in a fight with them, so that's what we're working towards. It's going to be a tough day tomorrow, but I hope it's going to be raining. I don't think we've ever driven here in the rain, so that would make it pretty interesting.

James Allison: That was mostly a difficult day but with some bright moments in it that give us hope that we can do a good job tomorrow and on Sunday. We're quite clearly a little bit out of step with the other teams in terms of our first lap performance on a track where we've traditionally found it a bit difficult to get the front tyres to the temperature we need them. But we made some decent learning steps during the day and if we carry on in that direction, then things should look brighter tomorrow. We're also quite reassured by the fact that on high fuel and when the first lap is taken out of the picture, the car looks swift and looks like it will be a good racing car. There's definitely a load of work for us still to do, but hopefully we can get that done well and put the frustrations of today behind us and retain the good bits that we saw.