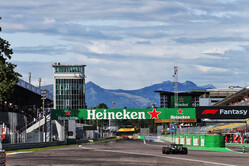 Not for the first time, in its infinite wisdom, F1's powers-that-be ignored the opinion of drivers and fans, and went ahead with its phasing out of gravel traps as a means of deterring drivers from exceeding track limits.

Instead asphalt run-offs became the norm and as an added deterrent at some corners, where drivers seem particularly keen to take advantage, sausage kerbs were added.

However, as we witnessed at Monza, things can go horribly wrong, and it is largely thanks to the Halo device and Lady Luck that the sport wasn't mourning for a second consecutive weekend when Alex Peroni crashed during the F3 race.

For as long as anyone can remember, the Parabolica featured a significant gravel trap, which not only deterred drivers from taking advantage, but punished those who merely made a mistake on entering the legendary corner.

Grand Prix Drivers' Association chairman, Alex Wurz, believes the sport should once again be looking at gravel traps as opposed to the sausage kerbs, which proved the 'launch pad' for Peroni's car.

"On corner entry, where usually you have issues with things breaking and you are coming from high speed, then an asphalt run-off area is quite good," he admits. "Sometimes gravel in these situations is actually dangerous, like you saw in Melbourne with Alonso, who slid sideways into gravel. Then you fly into the air, so we lose control of the car even more.

"But on corner exits, after you are down to your minimum speed, with any trajectory towards the run-off, I would think on eighty percent of solutions that asphalt is just too much.

"For the track operator, for everyday business, asphalt run-off areas are great," he admits." If you have the Porsche club, and if the amateur spins off, he doesn't damage his car in the gravel, and you don't have a half an hour red flag until you get someone out. But this is where you, as F1, as a track operator, have to decide.

"There is no easy solution here, but slowly and surely everyone is getting onboard of the message that we have to think of solutions. There are solutions.

"As a businessman in track design I am not disclosing them publicly, but I am getting very close to say 'OK, screw the business, we have to help the industry'," he insists. "That means step-by-step, corner-by-corner, and every corner is different because of styles and trajectory unique to each corner."

"We had yet another example of a sausage kerb ill placed, causing a massive accident," he says, referring to the Peroni crash. "We saw one in Spa few years ago in GP3.

"They reacted, and this sausage kerb is hidden now under a slow ramp, which would not propel the car into the air. But Monza was another example that those solutions are not good."

His comments come at a time when it is revealed that, ahead of next year’s return to the calendar, a number of gravel traps at Zandvoort will now be replaced with asphalt run-offs.