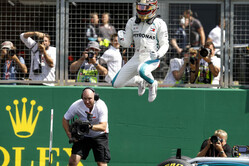 While Lewis Hamilton topped the timesheets this morning, edging out Kimi Raikkonen by 0.093, Sebastian Vettel never carried out a qualifying sim.

Indeed, the German never reappeared after the red flag that followed Brendon Hartley's crash, the Ferrari driver reporting a crick in his neck.

While Vettel received treatment from his physiotherapist, no such treatment was needed for Hartley who has been given the all-clear to take part in this afternoon's session. Whether his car will be ready following the crash, the result of a suspension failure, remains to be seen.

Vettel aside, it was business as usual at the top of the timesheets earlier, though both Red Bull drivers were over 1.2s off Hamilton's pace.

Of real interest is that behind the 'big three', and not far behind the Red Bulls are the four Ferrari-powered customer cars of Sauber and Haas.

Next up was the Force India duo, ahead of Fernando Alonso, the Renaults and Williams.

As a precaution, Toro Rosso opted not to run Pierre Gasly following Hartley's crash, the Faenza outfit needing to investigate the cause of what was a very nasty failure. Indeed, under orders from the FIA the team had to change the entire suspension on the Frenchman's car.

This being one of the best summers England has enjoyed for some time, the warm - read hot - temperatures are going to suit Ferrari, and despite the fact that Pirelli has brought its thinner tyres here, the Mercedes team will be disappointed that the weather isn't more 'typically British', as will Red Bull.

Twenty five minutes before the start of the session, Toro Rosso reveals that Hartley will not take part. "Unfortunately due to the tight turnaround between sessions, we won't be able to prepare Brendon's car in time," confirms the Faenza outfit.

Magnussen is first out, followed by Grosjean, Gasly and the Williams duo.

Grosjean is warned of a headwind in T1.

"I've got quite a lot of vibration," reports Gasly.

While most are on softs, Raikkonen is on mediums.

Asked twice if he is OK, Stroll finally replies "yeh". Unable to get the car out of the gravel, his session is over.

All of which is bad news for those drivers on the hot laps, including Leclerc, Ericsson and the Ferrari duo.

The session resumes and Leclerc leads Raikkonen back on to the track, the Finn, still on mediums, eager to get by the Sauber.

As it is revealed that Sirotkin is under investigation for failing to enter the pitlane when the red flag was displayed, the Russian goes off at T15. Though at first it appears he too has buried the Williams in the gravel, he is able to continue back to the pits.

As Ricciardo posts 28.124 to go third, Raikkonen goers quickest in S2, subsequently crossing the line at 27.549.

Currently 14th (29.516), Vettel goes quickest in the first two sectors, however Hamilton is also on a hot lap.

Bottas goes third with a 27.025, both Mercedes, like Raikkonen, on the medium rubber.

With 4:00 remaining, Sainz and Vandoorne are in the drop zone along with the Williams pair.

Leclerc goes seventh (28.026) ahead of Grosjean and Magnussen as the Ferrari customer cars continue to show extraordinary pace. Ericsson (28.466) is currently 12th.

Sirotkin makes a lat ditch attempt to make the cut, the Russian yet to post a time.

Sainz improves but this demotes his teammate into the drop zone. However, Hulkenberg improves to eighth which means it is Sainz who is out at the first hurdle.

"I got traffic," complains the Spaniard.

We lose Sainz, Vandoorne and Sirotkin, along with Stroll and Hartley.

All things considered, Gasly did well to make the cut,

Q2 gets underway, and shortly after Hamilton is first to head out, the Briton sporting softs. Teammate Bottas follows, ahead of Vettel, Verstappen and Raikkonen who are also on softs.

An early mistake in T4 sees Hamilton lose out in S1 as Bottas and then Vettel go quicker.

The Briton aborts the lap, as Bottas and Vettel continue to trade fastest sectors.

On his flying lap Hamilton goes quickest in S2, finally crossing the line at 26.256, 0.116s quicker than Vettel.

A 27.843 sees Ocon go eighth, thereby pushing his teammate further down the order.

Leclerc goes ninth with a 27.790, thereby pushing Hulkenberg and Perez into the drop zone.

Based on the evidence thus far Ericsson should be able to make the cut, but can he really out-qualify Hulkenberg, Perez or Alonso?

Hamilton heads out again as does Bottas, both sticking with the softs. Vettel, Raikkonen and the Bulls do not appear to be going out again.

"Rears are a little bit hot already," warns Hamilton. The Briton posts a PB is S1 before easing off in S2.

A PB in S1 for Alonso while the Haas duo also look set to improve.

Ocon fails to improve as do Perez, Alonso and Ericsson, possibly due to the rising temperatures.

Nobody taking the gamble of running with the mediums.

A sign of the times? For the first time this year there is no Renault in Q3, while there are five Ferrari-powered cars.