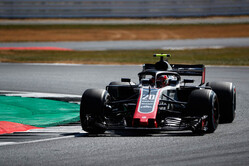 Kevin Magnussen has revealed that he almost had the same accident as that which ruled his teammate out of FP2.

With approximately 30 minutes of FP1 remaining, Romain Grosjean spun off at Abbey Curve, skimming across the gravel trap before nosing hard into the barrier.

The Frenchman emerged unscathed but the same could not be said for his car which had incurred structural damage to the chassis which meant the team was forced to build a backup, thereby keeping him out of FP2.

"It wasn't a big impact but the front wheel came back and removed part of the chassis," said Grosjean. "I closed the DRS, but a bit later than the previous lap - the air flow didn't recover and there was no rear downforce.

"FP3 is going to be quite important for us," he admitted, "and we're going to put as much as we can into that."

Magnussen subsequently revealed that he almost suffered a similar fate to his teammate as he attempted to use DRS at Abbey.

"I tried once and nearly ended up like Romain," he admitted. "It's not possible for us to do, Red Bull were doing it, I think, which is incredible because it's not even close to being possible for us.

"It might be possible through Turn 2 with no fuel in the car," he continued, "but I'm not sure it'll be faster because you put a lot of energy in the tyres.

"If you have downforce like Red Bull it looked solid. They don't put much extra energy into the tyres, that's the kind of thing we need to take into account."