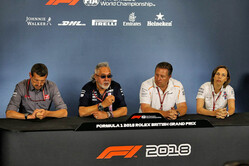 Zak, since the last grand prix in Austria, you've announced some management changes at McLaren, so let's deal with those first. First of all, why did Eric Boullier resign?
Zak Brown: Well, ultimately you'd have to ask Eric that questions, but in my conversation with him earlier this week, you know we've been under an immense amount of pressure, really even before Eric started, and I think ultimately the pressure and the desire to have McLaren move forward, I think he felt that a kind of a fresh start would give us the best opportunity, so he took that decision, accepted it earlier in the week. He's been in racing a long time, won a lot of race and I'm sure we'll see him a pit lane soon, again winning.

Q: So, how are you filling the void left behind?
ZB: Well, we've done a few things. It's the start of a journey to get back to our winning ways. It's going to take a little bit of time and a lot of hard work. We've got the energy, we've got the support from our shareholders. We promoted Andrea Stella to Performance Director and ultimately he's responsible for getting the most out of the race car at a race weekend. We brought in Gil de Ferran, who we worked with at Indianapolis last year and who has been doing some consulting and advisory work earlier in the year, as Sporting Director, and his role is to work with the team, the drivers, Andrea, and all of us to ultimately get the most out of the team environment at a weekend. And then Simon Roberts, who reports to me as COO, stays in charge of all the technical aspects to make sure that when we show up on a Friday at a race weekend we have as fastest a race car as possible and as many new bits to throw at a car to continue to develop it. And that's going to be what you see here this weekend, but as I said, it's the start of a journey, so we're just getting started, we're not finished.

Q: And how have the drivers received the news?
ZB: Very well. I spoke with Fernando, Stoffel and Lando just the morning before we made the announcement. I think they have got a lot of trust in the team. We communicate very well. Fernando is someone who has a tremendous amount of experience. Like with all the team members, when I walk around the factory, I seek information, draw on experience, because we have so much experience inside McLaren, so many great people who have won a lot of championships and races, and Fernando has had the benefit of being at multiple different teams. I know there has been some conversation about was he consulted. I think sometimes people take words a bit too literally. It's my role to talk and communicate with all the team - drivers, engineers, mechanics - all throughout since I started. So I take on all that information and then work with the leadership team and the shareholders and make some decisions and move forward.

Q: Thank you. Claire, we've just heard about the changes being made at McLaren. Are further personnel changes needed at Williams to get you guys more competitive?
Claire Williams: Listening to Zak, it's a very similar story that is going on at Williams at the moment. We're in fairly similar positions. Of course in order to effect change, you need to make changes and you need to make some hard decisions and we're going through that process at the moment but it's not a case of rushing into it. Sometimes when you rush in you can make decisions you don't want to make and end up regretting those decisions. We're undertaking a full evaluation of our internal structures and processes at the moment. We haven't completed that work yet, so we don't have any news to announce. But it's mostly about identifying the talent that we do have in-house. We have a lot of great people at Williams that are working really hard at the moment in this difficult situation that we're in. So it's focusing on that, focusing on the good that we have and then seeing whether we need to augment that talent, augment that resource we have and then move forward from there.

Q: OK, what about Silverstone this weekend: it's your home grand prix, how frustrating is it for you personally to be turning up at the track where the team won its first grand prix, its 100th grand prix, with the team in such an uncompetitive state?
CW: Yeah, I think I was quoted as saying that I was dreading coming here, earlier this week, and I have been because as you said this is a track that holds a very special place in everyone's hearts at Williams, for a variety of different reasons. This is our home race, there are a lot of Williams fans here, Finally I'm seeing some fans with Williams Martini Racing t-shirts around the place, which is great to see, and we have let our fans down. And for us that is as equally disappointing as we all feel at the moment with our performance. However, coming here and being here yesterday has been a really nice boost for everybody and for me in particular. You get to see all our great fans, who do still support us through these difficult times. They continue to support us and I think yesterday, just being here amongst the British fans, has given us a real boost. We had a good morning this morning in practice. As I said, we're doing a lot of work to bring upgrades to the car, but really considered upgrades as well, and that's taken a bit of time to get the upgrades here to this race. But hopefully with the result of that hard work... I'm not saying that Sunday is going to be a turnaround in our performance, it's still going to be a long road for us, but hopefully we will do a better job for our fans this weekend.

Q: Claire, just a final word, your father was at the track yesterday. Is he in good heart?
CW: He is. He is thrilled to be here. It's really lovely to see him back in the motorhome. I think he's causing a bit of panic in the garage at the moment. The boys haven't had him in the garage for a number of races now. So it's good, it keeps everyone on their toes, but it's just lovely to have Frank back in the paddock, he's a real icon of the sport and this is where he belongs.

Q: Thank you Claire, good luck this weekend. Vijay, it's the first time we've seen you in an FIA press conference this year, so could we just have your assessment of the team's progress in 2018?
Vijay Mallya: Well, we've not had the best start that we were hoping for. We haven't managed to get both cars into the points. We've had three of four first-lap incidents, all of which contribute to where you are in the Constructors'. I have every confidence in my people across the road at the factory. They are used to punching above their weight, which is something that I truly appreciate. We find ourselves two points behind McLaren and seven behind Haas, thanks to their special performance at the last race, and we're 20 points behind Renault. We have been 20 points behind Williams two years ago and we still managed to secure fourth. I remain cautiously optimistic that we will get fourth again in the Constructors' Championship in 2018. We brought a small upgrade to the car here at Silverstone and FP1 has shown it. Whether I'm at the race, or at an FIA Press Conference or not, the guys are doing a great job.

Q: Certainly the two guys in the cockpit are doing great jobs - Esteban and Sergio. Both very talented, very consistent. With the driver silly season hotting up what do you feel you have to do to retain both your drivers for 2019?
VM: The drivers are very happy in our environment. They have said that several times to the media when asked. We are very happy with both Checo and Esteban. If, of course, they get a seat in a world championship-winning team it's going to be a tough task to retain them, but if they are not offered any such opportunity, I see no reason why they should not stay with us, because we give them the opportunity of being best of the rest. We have shown that for the last two years and hopefully we will show that this year as well.

Q: Guenther, an unfortunate incident for Romain in that first practice session, what can you tell us about the state of his car?
Guenther Steiner: We need to change the chassis, so he will not be going out in FP2. As simple as this, yeah, he had some damage on it and he will not make FP2.

Q: A frustrating day for him and the team. But let's look at the positives; if I can take you back four days to Austria, where things went better. What was the overriding emotion for you when both cars crossed the line?
GS: I think it was like... because we knew we could do this. We had a few races where we could do and for one or another reason we never got to do it. We performed at this level. For sure, we were a little bit lucky with some of the first six dropping out, half of them basically, so that's why we ended up fourth and fifth, otherwise we would have been seventh and eighth. But we knew could do this and it's just 'OK guys, this is what's possible. It happened now and let's try to do more coming here'. It's one thing when you have a result like this, you cannot wait for the next race to go to. It was a long wait, but now we're back to a normal day in the office: one car we need to change chassis, the other driver is with the stewards right now. We're just getting normal now again. I hope we can get it back together tomorrow and have a good race on Sunday, more like Austria. You cannot always think it's going perfect because it went perfect once. We still have work to do.

Q: I asked Vijay to assess the performance of his team a moment ago. Can I ask you specifically about Romain Grosjean - the ups and downs of his season. To go from fourth last weekend... How important was that fourth place, first of all for the team?
GS: For the guys that work on Romain's car, they were getting anxious because we had so many good moments and then we never got it home. So for finishing fourth they were very happy and I think the morale was fantastic week as you can imagine, they are back home, and plus they finished fourth - and now they have to change a chassis.

Q: And how important was it for Romain?
GS: I think very important. He knows he can drive a car. It just didn't happen. As I said before, for one reason or another it never happened this year that got into the points. And then on his first points scoring getting 12 points was very good. I think he was relieved, I would say.