Alonso had no say in Boullier move 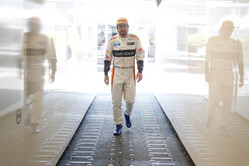 As his team prepares for its home race, just two days after its race director quit, Fernando Alonso has said he had no say in the move.

Among the various charges levelled at the team in recent times is that team boss Zak Brown, in his efforts to placate Alonso and keep him on board, has given in to his every demand, be it missing last year's Monaco Grand Prix for the Indy 500, running a parallel WEC programme alongside his F1 duties and the sponsor space given over to the Spaniard's leisurewear company Kimoa.

However, speaking at Silverstone, Alonso denied any say in Boullier's 'resignation', nor in the subsequent management reshuffle which sees Andrea Stella - with whom the Spaniard worked at Ferrari, and who left the Italian team at the same time - promoted.

"I wasn't consulted," he told reporters. "I was informed about all the changes, and all the new possibilities, just as Stoffel has been informed.

"Obviously I had more experience with Andrea than Zak, who only knows Andrea for one year, and he wanted my opinion, and how I see also Gil," he added, referring to Gil de Ferran, who many thought had been brought on board to advise on a potential IndyCar programme.

"Obviously he knows Gil for twenty years and I know Gil for one year, so he knows much more than me in terms of what possibilities and what scenarios maybe Gil can come into play."

"If Zak thinks that there are other people now doing different jobs in the team, it's because he thinks it's the best thing to do, and I trust 100% Zak," he insisted. "I trusted 100% Eric, I trust always the bosses because they are the ones that have all the information. We just drive cars."

Asked if he was now essentially leading the team, Alonso replied: "No, I don't think so. But definitely I have more experience than probably all the engineers at the track.

"My race engineer's in their sixth year in F1," he continued, "the performance engineer's in the fourth year, the tyre engineer is in the ninth year, it's my 18th year. So some things maybe I try to give my feedback what I've experienced in previous teams or what are my experiences from different tyres or different weather conditions or qualifying conditions or stressful moments, whatever. It's no different to any other driver."

Insisting that the reshuffle will play no part in deciding his plans for 2019, he said: "Maybe it changes something tomorrow, but today it changes nothing.

"Andrea is sitting in the same position as race performance engineer, head of the engineers for the two cars, he was sitting there and he was doing exactly the same job, running the team meeting and things like that. Gil I think is maybe more strategic decisions for the future, or something like that, not for everyday life change.

"It doesn't change anything for me, for the future, or anything. The most important thing is to keep improving the car and being more competitive, and hopefully with this new organisation the team can move forward quicker. This we will see in time."

The Spaniard concluded by claiming that he has total faith in Brown, comparing him to his boss at Renault - as well as manager and business partner - Flavio Briatore... who was at one time banned from F1 for his role in Crashgate.

"With Zak obviously we have a very close relationship even if it's a short time that we met," he said. "He's a racer, he understands racing commitment and spirit and I think he's going to be a good leader for the future at McLaren.