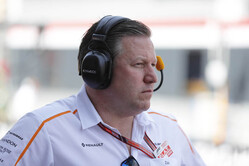 While in recent times Fernando Alonso's choice of places he would rather be has become an F1 meme, you can bet that ahead of tomorrow's FIA press conference Zak Brown will be feeling similar thoughts, wishing there was anywhere on earth he might be rather than in a press room filled with journalists all wanting to know what on earth is going on at McLaren.

The American faces the media just two days after it was revealed that race director Eric Boullier had fallen on his sword and left the team as it undergoes yet another management reshuffle.

The Daily Mail's Jonathon McEvoy, who enjoyed a bitter exchange with the Frenchman two weeks ago, claiming that he would be out of his job by Silverstone, will be beside himself with glee at the prospect of grilling Brown, no doubt rehearsing for his big moment in shades of the iconic ‘you looking at me’ scene from Taxi Driver.

Indeed, in the wake of Boullier's departure, the briefest of looks at F1 websites and social media reveals that many feel the root of McLaren's problems go a lot higher than Boullier, and that it is Brown himself who should have gone.

Speaking on Sky Sports recently, McLaren's former head of communications, the widely respected Matt Bishop, dismissed much of what the Daily Mail was reporting, insisting that the British tabloid merely wanted to go to "war" with the Woking team. Sensing that further heads may well roll at Woking in the coming months, and no doubt intrigued by the revelation that parent company, the McLaren Group, has been drawn into a mysterious investigation by the UK government, one can expect all manner of hacks not usually present at the track heading up to Northamptonshire to give Brown the third degree.

Yet while McLaren is underperforming - surely a masterpiece of understatement - what of Williams?

Though it has the mighty Mercedes engine in the back, the multi-champions are languishing at the bottom of the standings and not looking to improve any time soon.

Other than a car of which Robert Kubica claimed the best part - other than the engine - was the paint job, the Grove outfit is running two youngsters both of whom are said to have got their seats on account of their backing as opposed to raw talent.

Then there's the question of the loss of title sponsor Martini, whose contract with the team ends this year.

One might ask why Williams isn't facing the same intense media scrutiny as its Woking rivals, according to Paddy Lowe it is the team's humility.

"You've got to look at the team and what it represents, and particularly look at Frank and what he created," says Lowe, according to Motorsport.com.

"It's a very well respected team," he continues. "Frank's approach, his values, the way he's approached motor racing, is instilled in the team and continued by Claire in a great way, a sense of sportsmanship and humility around what we do.

"I met Frank once in a hotel lobby when I was at McLaren and they'd had a really bad day, 10 or more years ago, and I said, 'Sorry about your bad day Frank'. He said, 'We were tested and found wanting'. That's his attitude.

"There are others that have less humility, who blame anything else but themselves when having a bad day," he adds. "I think people sort of respect and sympathise with our position when things aren't going well. And they then don't tend to bail in and tear us apart."

As if by magic, Claire Williams will also be present at tomorrow's press conference, as will Force India's co-owner Vijay Mallya - who has his own issues to deal with - but it is Zak Brown who will face the most questions, and certainly the toughest.