F1, so far so good under new management 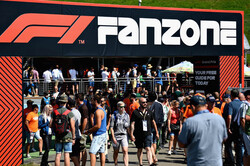 The ambitious plan to provide a regulatory and financial framework that will please all aside, for the most part team bosses appear happy with Formula One under its new management.

Though the intention to introduce a budget cap and spread the moolah more evenly, not forgetting introducing technical and sporting regulations also aimed at levelling the playing field, may yet cause more threats and even a walkout or two, the team bosses agree that much of what Liberty Media in terms of the fans has been for the good.

"I think there have been some very good things," said Christian Horner. "I think Liberty are very much fan-focussed, so things like access to content for opening up digital media, social media... I think the engagement with fans, creating a better experience trackside.

"I think the promoters, certainly the teams, have found that there's a different approach, a different attitude regarding that side of the business," he added.

"Obviously with every new change of regime, the style changes," added Toto Wolff, "and we have all been used to Bernie's way of doing things and lots of credit to him for having built-up the sport. We all wouldn't be sitting here if he wouldn't have been as visionary and powerful in the past in building Formula One.

"With the new ownership, it's not one person any more than makes the decision but a broader group of people and the transparency that has kicked-in is refreshing and makes things easier to deal with.

"Obviously we, as a sport, face tremendously challenging times," he admitted. "Like any other sport, the way sports are being broadcast has changed, and will continue to change and we are all having the challenges of seeking additional income, and that has been equally difficult for Liberty. But they have been trying things: some good, some bad... or some less good but I think overall we're all in the same boat.

"We want to see the sport grow, we want to see revenue grow and, bottom line, we can all understand that there is a financial reality that needs to be respected. The top teams are spending too much and we need to get that under control. In so far, summarising, I would say it was positive."

"I can only see positive aspects from them," agreed Toro Rosso's Franz Tost, "and I'm also convinced that they are going in the right direction for the future of the sport, because it's important that Formula One will be changed, from the cost side and what they want to do is absolutely the right thing, to come down with the costs.

"They brought in a new attitude for the media, they're concentrating on the social media are being preferred more and I think all of these aspects together are important, that Formula One will go in the right direction.

"What we need is not a two-class society like we have now: three teams and the rest of the world. No, it needs ten teams that are close together. Or at least four or five teams are fighting for the championship, fighting for race wins, and this must be the goal, otherwise Formula One is not interesting in the future. I think Liberty Media understood this and they are going in the right direction. I can only support them."