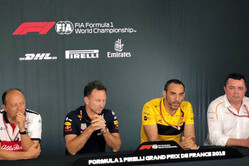 Eric, you played a big role in the return of this race here to Paul Ricard. Just tell us the story of how it came to pass?
Eric Boullier: Well, I have not played that big role, as it is described, just bringing a little help and you know, being on the other side of the channel, so just making the connection between Christian Estrosi and Bernie Ecclestone, at the time, to make sure that the project that has been started a few years before, concrete.

Thank you, we'll come back to you in a bit. Fred, you've obviously been here before in junior categories but what do you think of Paul Ricard as a grand prix venue?
Frederic Vasseur: For me it's a lot of memories for sure. I think it will be a good event. The layout of the track, for me, is fine and everyone will enjoy the weekend.

We just saw in FP1 there some encouraging pace in the car but then an accident for Marcus. What are your hopes for Sauber this weekend and is there an update on the car?
FV: We have a small update on the car, it was difficult to see this morning, but step by step we are improving. The first target was to catch up the field and I think we did it. Now we have to improve step by step. For sure for Marcus it was a tough session this morning and he won't do FP2 this afternoon, but let's see tomorrow.

Thank you for that update. Cyril, Renault's home race, as well as one for yourself. How much pressure is there on the team and how big an event is it for Renault?
Cyril Abiteboul: Well, we are trying to be a bit insensitive from pressure, because we know that the pressure is not going to improve the result on Sunday, so we are just trying to take a similar approach to the approach we have been taking so far, which is trying to be in the top 10 on Saturday and Sunday, which we think the car is capable of, including this weekend. And great to have a home race, it's an extra boost for everyone. There are a number of French players in Formula 1. What I mean by players is drivers, engineers, managers, teams, so it's great now to have a stage to see all those players in action.

Christian, another topic that has been in the news this week is that you are going to have a new power unit partner from next year onwards. Can you just explain the thinking behind that decision?
Christian Horner: Yeah, it's exciting news for us. We've been in a relationship for what will be 12 seasons, so it's a hugely long time. But basically, we've reached a juncture where we have decided to take a different path for next year. We have been following the progress of Honda's development very closely, having obviously been in the back of our sister team so far this season. Driven by an engineering-led decision, we've elected to take a different route for the future. We'll look back on our time with Renault, obviously there have been many highs, some lows, but overall it has been a very successful partnership - 150 podiums, 57 grand prix victories, eight world championships during those 12 seasons. We're hoping to add to that between now and the end of the year, but obviously from 2019 it's a new journey for us and one that we're looking forward to.

And as for Renault's home race, you just touched on it there, what are your hopes for the rest of this season with this partnership, what can it still achieve this year?
CH: Renault, ever since we have been supplied a power unit by them... they've had a works team, they left the sport, they came back in, but what they have been very good at with us is giving us parity and equality in terms of the state-of-the-art equipment they have and we have no reason to believe that won't continue until the end of the year. We're outsiders in both championships, in both the Drivers' and the Constructors' championships and we believe that we've still got opportunities to close the gap to the cars ahead and we are going to need Renault's support to achieve and do that between now and the end of the year, which I'm confident that we'll have.

Cyril, can we get Renault's feelings on the news from this week?
CA: Well, as said by Christian, it's an important news, an important development both for Red Bull and for Renault, and obviously for Honda. We put a little bit of pressure because it was important to get that clarified sooner rather than later for a number of reasons, starting from a logistics perspective with procurement and supply of part and also IP and confidentiality, because even the way we are working with Red Bull, which is completely integrated, without any sort of Chinese wall or barriers. It was important to get that clarified sooner rather than later so that we can make plans and also can focus our efforts on 2019, knowing exactly where things are at in terms of customer base. So that's done, thanks to Red Bull for making that clear. And that's a clarification of really the plan of last year when we agreed to terminate Toro Rosso at the end of '17 and Red Bull at the end of '18. Frankly, as said by Christian it has been a wonderful journey. I'm extremely thankful of Red Bull, which has been a good partner team - very challenging, demanding, but also by being challenging and demanding in that sport which is a competitive sport and a competitive environment that we progressed. And we have progressed as a team, as a group. It's certainly something then when we will look back we will see that we have achieved and learned a lot together. So for the future, again as said by Christian, we have a package all together that is capable of winning races, maybe championships, why not, so we will continue to do what we have always done, nothing less, nothing more, to try to help in that respect. That will show that what we are providing is of quality, both in reliability and performance and for the rest, I full appreciate that there was a strategic decision that was involving a number of parameters to be done by Red Bull.

Finally, Eric, what does this news mean for McLaren, as it becomes the only Renault customer from next season?
EB: We are starting a new journey with Renault and getting used to working together there are a lot of things to discover and to build on and having obviously a little bit more focus, less distraction for Renault, having one team less to supply and to care about it's obviously good news for us and we wish Christian the best.

(Scott Mitchell - Autosport) Daniel Ricciardo is on the market for next season, he's named your respective teams as possible options for next year. I just wanted to get your thoughts on how interesting an option he is for you and what you can offer him, given that the competitiveness currently lags behind Red Bull?
EB: It's obviously this time of year that you start to think about your driver line-up for the following year or following years. Obviously we love Daniel, I personally have known him for many, many years. He is doing a good job with Red Bull. As long as a driver of that calibre is on the market you look if there is any discussion possible but at this time of year it's still too early to talk about our driver line-up for the future, so just a normal, gentle discussion.

CA: We have in Nico and Carlos a very strong line-up. I am extremely pleased with the way that they are developing together. They are performing and they are also driving the team and building the team. For the time being it's a bit early to talk about the future. Obviously we have a particular situation with Carlos, in the sense that he on a loan to us from Christian and Red Bull. So we have to see. We can say that it is unconnected to engine decisions but it's not. Frankly Carlos was loaned to us because of all the musical chairs that happened last year, so it was part of that agreement. So I expect that there will be some collateral consequences and that's something that frankly we are here to discuss with Red Bull and I'm pretty sure that we will discuss that in the next few weeks. We need to watch out for any driver development from Red Bull's side first and the collateral consequences that it may have on us. For the time being our focus is on developing the best car possible. If we show that we can progress, if we show that we can build a good car, drivers will get interested in joining us. We have to focus on that first and foremost.

Christian, anything to add, these are your drivers we are talking about?
CH: Yes, they're both our drivers actually. Look, the situation with Daniel, I think that there is an intent from both sides to move forward. The first thing was to close the situation with the engine. That has now been done. Daniel understands the rationale, the engineering rationale, behind that. Let's not forget that he has been in a car that in the last couple of grands prix has been lapping the cars to our left. So it would be a fairly bold decision to step out of a car that he has won two grands prix in this year as a championship contender. I would be surprised if he was to leave, because it's a good fit between himself and Red Bull, but it is Formula 1.

(Dieter Rencken - Racing Lines, Racefans.net) Christian, although you have alluded to the performance-led decision about the engine swap to Honda, there are obviously certain commercial benefits in terms of engine supply, possible branding on the car etc. Given that Red Bull contributes about 25% of your budget per annum, will these commercial benefits be used to offset that or will you be ramping up your engineering spend in the face of budget caps and costs?
CH: Well, of course I'm not going to get into the depths of the financial arrangements of contracts but it's safe to say that we are going to see benefit in that we won't be paying the amounts we have been paying to Renault, but there are costs involved where you are feeding dynos and gearboxes and other hardware. The net result is obviously a positive one but it is one we are investing within the team to ensure the continued performance is absolutely there. I think that it's important for us strategically... the rationale behind this partnership was very much with an eye towards what's past 2020 as well, of having the right partner for the future. Aston Martin have also been very involved in our decision-making, they are fully supportive and let's not forget, they don't make engines, so it was a natural fit.