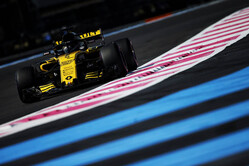 Renault Sport Formula One Team heralded the return of Formula 1 to French soil for the first time in ten years as Nico Hulkenberg and Carlos Sainz took to the track in searing temperatures for the opening day of the Formula 1 Pirelli Grand Prix de France.

Both drivers completed a productive day of running in the first official practice sessions at Paul Ricard for the first time in 28 years. Making good progress through the day, Carlos was the faster driver today, setting the eleventh fastest time in the first session, a 1min 34.258secs, whilst Nico went eleventh quickest in the generally slower later session.

In FP1, both drivers ran with Pirelli's Supersoft (red) and Ultrasoft (purple) tyres, with an increased focus on car set-up. Both drivers focused on tyre performance in FP2, with Carlos using the Supersoft and Ultrasoft tyres and Nico the Soft (yellow) and Supersofts.

Nico Hulkenberg: "That was a productive day for us and it was enjoyable to be out there pounding in the laps in the sun. We made good progress with the car even if we had to deal with some indecisive wind which changed its direction between sessions. The track is good to drive and we saw a few people running over the limits on occasion. We learnt a lot and there's more to come from us tomorrow."

Carlos Sainz: "It was great to get out there in a Formula 1 car at this circuit where I've raced in the past. There seemed to be a lot of traffic out there at times, but we were able to run through a good programme and make steps forward through the day. I'm quite happy with the car but we know we can further improve it for tomorrow. It was great to see all the yellow in the crowd and I'm looking forward to seeing more of this over the next couple of days."

Nick Chester, Chassis Technical Director: "It's always fun coming to a new track and learning it, and it's even better when it's a home race for the team. It was a fairly straightforward programme for us today, with a little less experimental work than normal, replaced with more focus on set-up and getting the drivers used to the circuit. The wind changed direction for FP2, but then dropped in intensity so that made things easier with the change of direction and some of the balance issues experienced in the first session. On the short runs we're not too bad, but we still have some pace to find. On the whole, we were happy with the pace on the long runs with tyre management presenting no surprises. Both drivers reported the track being bumpier than they expected, adding this to the variety of corners meant that getting the balance right is a tricky task here."