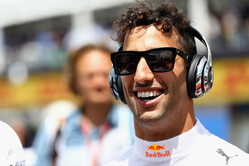 Sections of the mainstream media have gone overboard today on a story that first appeared in the German media claiming that McLaren is on the verge of making Daniel Ricciardo the sort of offer few could refuse.

Sports Bild claims that McLaren is offering the popular Australian around $20m a year for a "multi-year" deal which is thought to be around three times his current salary at Red Bull and half what (current) teammate Max Verstappen receives.

Interestingly there are no quotes from McLaren or Ricciardo, rather Helmut Marko who tells Sport Bild: “Our Daniel Ricciardo is the king of the market. McLaren offers him more every week, but above all some people in Mercedes would absolutely want to join them in the team.”

Ricciardo, who is only seeking a two-year deal in order to see out the current formula before the regulations are overhauled in 2021, insists that he has not spoken to anyone yet and is waiting until the summer break before making a decision.

However, Red Bull's confirmation that it is to use Honda power from next season may have forced the Australian's hand... one way or another.

Not only is Ricciardo a proven race-winning driver, who in his debut season at Red Bull gave Sebastian Vettel a serious wake-up call, he is charismatic and popular with fans and the media, a sponsors dream.

While Red Bull has made no secret of its desire to retain him, he would be a perfect fit at either Mercedes or Ferrari.

In the midst of all this, if there is anything to what is essentially a rumour, it does at least give us an idea of Fernando Alonso's plans for 2019 and clearly they don't involve F1 with McLaren.

The more cynical might suggest that the story is a smoke and mirrors effort to turn attention away from Martin Whitmarsh's recent claims of unrest in Woking, claims that were met with a brief statement as opposed to a full-on denial and public rubbishing of his comments.

As it stands, moving to McLaren at this time would be career suicide for Ricciardo.

Indeed, if he really wants to have a Renault powering him next season he would be far better off switching to the French manufacturer's works team… now that would be an interesting, and possibly very rewarding move.

In the wake of some of the French outfit's more controversial signings in recent months, a headline act like Ricciardo would be the perfect choice.