Boullier: No immediate plan to switch focus to 2019 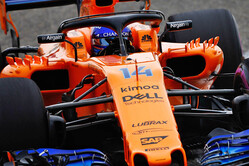 Having lost fourth place in the team standings to Renault in Canada, it is entirely possible that McLaren might concede fifth to Force India over the course of the next three weeks during the sport's first ever triple-header.

However, despite a slump in form that has seen the Woking outfit fail to score a single point in the last two races, and mindful of the raft of aero regulations to be introduced next season, Eric Boullier insists there is no current plan to switch focus from the team's current contender to its 2019 car.

"I think it's worth to develop it for a couple of reasons," he said, according to ESPN. "The first one is to understand what's wrong and to not repeat any kind of platform mistakes in the future.

"Secondly, I think there's still time to develop this car, potentially curing the low-speed lack of grip which has a big impact on top performance. So those are two reasons why we should carry on.

"We also need to make sure we don't compromise next year's development as well as understanding the car," he added. "That's the balance which we are working on.

"We are flat out on trying to cure these car issues, and to make sure we understand it, and obviously we will start soon on next year."

Referring to talk of unrest within the team, particularly in the wake of Tim Goss' departure, the Frenchman said: "First of all, it's not down to one designer. We have 100 percent confidence in the group of people we have at McLaren.

"We can blame obviously some issues on the car," he added. "Definitely I think the car this year is not the car we were expecting to have. It's just a matter of understanding why and making sure we have the right vision and leadership for the future to conduct and make sure we can design and manufacturer competitive cars.

"I believe in the people we have in place today. There is a great talented bunch at McLaren."

Having previously claimed - while partnered with Honda - that the McLaren chassis was one of the best out there, and admitted that it is targeting Red Bull in the team standings, the performance of the RBR14 when compared to the identically Renault-powered MCL33, paints a somewhat different picture. While Red Bull has claimed two wins and two other podium visits, McLaren's best result is fifth in the season opener.