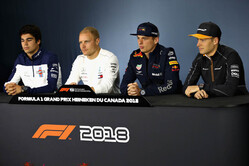 Lance, it's your home race and a very busy week for you, but you must be very excited to be back racing in Montreal?
Lance Stroll: Absolutely. It's great to be home. I really enjoyed my week, catching up with friends, family. It was a bit of a busy week, a lot going to, but great to be home and can't wait to jump in the car tomorrow.

Obviously you had a bit of a tough time in the last race in Monaco. How does Williams go about bouncing back from that weekend, both here and moving forward this season?
LS: It's a very different kind of circuit here in Montreal. We learned from what wrong in Monaco and it's a long year. Moving forward, we've analysed a lot of our weaknesses and we're working on how to solve them.

Max, it was a tough Saturday for you in Monaco, but a better Sunday. So did you leave the last race with a few positives to take from the weekend?
Max Verstappen: Yeah, I enjoyed the race. I had a good battle with Stoffel as well. He was not giving me a lot of room, which was good to see. Yeah, I got back into the points, you know, starting last, so I definitely enjoyed myself on Sunday.

After the race on Sunday there were some comments from the team that maybe a change of approach might benefit you. What does that really mean and will we see a change of approach from you?
MV: Well, you know, I get really tired of all the comments of me, that I should change my approach. I will never do that, because it's brought me to where I am right now. After a race, it's not the right time to talk. So everybody who has those comments, I don't listen to it anyway. I just do my own thing. Of course, the beginning of the year so far it hasn't been going so well, not in the way I liked it. A few mistakes, I think especially Monaco and China, but it doesn't make sense to keep talking about it, because I get really tired of it. Yeah, it just feels like there are no better questions out there than to keep asking me about what happened in the previous weekend. So yeah, I'm just focusing on what's ahead. I'm confident that I can turn things around. You know the speed is there. I've always been quick, every single weekend. It would be much of a problem if I was really slow, because that's a critical problem.

Thank you very much. Valtteri, Monaco was described as damage limitation for Mercedes by Toto Wolff, but it was probably slightly more competitive than maybe the team expected. Does that mean that maybe you've ironed out some of the weaknesses in the car? And you've traditionally been strong here, so do the strengths remain in place?
Valtteri Bottas: Definitely Monaco was tough. We always knew that it could be, and that it could be a really strong circuit for Red Bull and Ferrari. So yeah, I think it was damage limitation and we were more or less matching the performance we estimated, or even slightly below. It definitely highlights all the weaknesses we have in the car. The car is definitely not designed for Monaco. The car is designed for most of circuits to be quick, including this one. So at least last year, if the trend stays similar, that we were weak in Monaco and good here, I hope so, because it was a really good for us and hopefully we can have a good weekend here.

Just on a personal note for you, if you had have won the race in Baku you would have been leading the Drivers' Championship. Now, two races later, you're 42 points off the championship lead. Do you feel you have had the returns you deserve this season so far?
VB: Well, I don't want to think about too far behind. Those are the points we have now and I need to deal with it, we need to deal with it, as a team. So, I'm also just really looking ahead. It's still very early in the season, anything can happen, and I hope I have had my run of bad luck for the year and that things can turn around. There's no point really in stressing about it. I just want to keep going. I want to win races and I'm sure it will come.

Thank you. Stoffel, similar to Valtteri really. The statistics say that Fernando has got the better of you in qualifying and the races so far this year, but do you feel that tells the whole story of your performance?
Stoffel Vandoorne: No, I don't think it tells the whole story. Obviously, the statistics tell maybe that, but I think in reality we are very, very closely matched. In terms of where I was last year, I feel I'm in a much better position this year. I think things have not always gone my way. We lacked a little bit of luck on some occasions. And some occasions Fernando was just the quicker one as well, which is normal. I think we are going in the right direction. The team is moving forward. We've obviously had a tough start to the season. There were a lot of expectations on our team and we've not managed to perform as expected. So we keep improving race after race and hopefully this weekend we can show we made another step forward.

The team was managing to pick up points with both cars at the start of the season, but the last couple of race that seems to have tailed off a bit. Can you tell us why that is?
SV: Yeah, it's been a little bit of a difficult period. I had a retirement in Spain and then Fernando had a retirement in Monaco. Obviously that was not ideal, but I think we are still very close in this midfield and one weekend we are a bit stronger than another one. The last couple of races have been difficult tracks for us as well in terms of overtaking. I think this weekend is a different story again. It's a new weekend, this track is completely different to the other ones and hopefully should provide us some opportunities.

(Andrea Cremonesi - La Gazzetta dello Sport) Question for Bottas and one for Verstappen, about the engine. We know the Mercedes engine is not here, the update is not here, so I would like to know how do you feel, if you have a big handicap or not. And for Max, I think that you will use the new engine, I would like to know what you expect from the upgrade?
VB: We were initially expecting to bring the new power units to this race, which would have been a small gain compared to the old one. We found some issues so, just to be safe we need to make it perfect and hopefully run it in two weeks. For sure the new one would have been a little bit better - but it's not like our old engine, the phase one, is a bad engine. It's a good one and it's still healthy. It's been reliable, so no concerns on that. We're also planning to use it again later this year in Budapest - but now, instead of that, we're going to use the new one in Budapest, so I think it's going to be a small penalty. Obviously would have been nice but that's how it is.

Max?
MV: Yeah, I expect a little bit more horsepower - but yeah, we'll see on track how it's going to perform but, of course, it's always good to get an update.

(Heikki Kulta - Turun Sanomat) Valtteri, you have always liked Canada. How much more would you like it if you would be the third ever Finnish winner here?
VB: Yeah! Definitely always liked it here. I love the track; I love the place and I've normally had pretty decent races here so we want to do that again as a team and me personally. Of course, winning here would mean a lot - like winning every race for me.

(Jonathan McEvoy - Daily Mail) To Max, why have you had so many accidents?
MV: I don't know. And, like I said in the beginning of this press conference, I get really tired of all the questions, so... yeah... I think if I get a few more I'll head-butt someone.

(François-David Rouleau - Le Journal de Montréal) You were talking about your car in Monaco, can you please elaborate what went wrong over there and how could you improve the car this week in Montreal?
LS: It was just a frustrating weekend start to end really. Never really... yeah... I wasn't really able to dial in and I never felt like I had the car under me to be able to piece everything together. Sometimes those weekends happen. It's a very unique track kind of track also. I think Monaco is a one-off event and it's really important to really have the confidence to push the car and I never felt like I got to that point in Monaco - but it was one race. I felt much better in all the other races, so I'm turning the page here this weekend and looking forward to Montreal.

(Bill Beacon - Canadian Press) For Lance. There are reports you will be signing a new contract with Williams at some point soon. How do you feel your progress has been in your second year - and are you looking forward to getting a new deal with them?
LS: I'm not aware of the contract. To be honest, I've just been focussed on driving the car and getting the most out of myself every weekend. But yeah, it's been a frustrating start for all of us. As a team, we're not where we want to be - but in many ways it's also been very positive in my view. Even though it might not show in terms of results, due to where our package is today but I feel like in many ways I've made a big step over the winter. Looking back at where I was last year. And, it's a very long year. Formula One's a marathon so I'm looking forward to the rest of the season. Hopefully we can turn things around and pick up some more points and go on to have a great rest of the season.

(Dan Knutson - Auto Action and Speedsport) A contract question for you, Valtteri: how do you deal with this contract in limbo? Do you just ignore it and get on with the job or do you talk to people or what do you do?
VB: Yes, during the race weekend especially, just ignore it, focus on the job, that's always the best thing to do and when the time is right, then between the races ideally you start to speak with the team but the time is not quite yet but I have no worries or no pressure on that. I feel I'm in a good place and everything between me and the team has been very positive, we're making good progress together all the time, so just need to continue and we will see a little bit later on.