It's reckoned that there is a 50% chance of the Safety Car making an appearance this weekend, ironic really when you consider that the first time a Safety Car was introduced during a Formula One Grand Prix was back in 1973 during the Canadian Grand Prix, albeit at Mosport Park.

On that occasion a yellow Porsche 914 was sent out following various incidents in treacherous weather conditions. However, the downside was that it took several hours after the race to confirm the winner and final results as the Safety Car driver had placed his car in front of the wrong competitor on taking to the track, thus inadvertently causing part of the field to be one lap down.

The Safety Car as we know it today however wasn't introduced until 1993, following experiments at the previous year's French and British Grands Prix.

Safety Cars (SC) and Virtual Safety Cars (VSC) have played a crucial role in the outcome of half of the races so far this season.

The biggest challenge a Safety Car brings to the teams is to make the right strategy choices. Under the SC the tyres will very quickly become cold. If they're new tyres, that's not much of a problem as they will be back in their operating window fairly quickly after the re-start, usually after two to three laps. 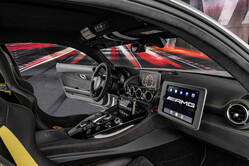 Tyres that are in the middle or the end of their stint are much more difficult in that respect as they will re-start slower - or not at all. Without a Safety Car, at regular speeds and temperatures, those tyres would still generate good grip. However, once the energy is taken out, there is not enough rubber left on the tyre to re-start it. Newer tyres provide more grip because there's more rubber on the tyre and are thus able to generate more energy which will then heat up the tyre quicker. Anticipating how the tyres will behave after the end of the Safety Car is challenging as it is very tricky to simulate tyre wear and because it is difficult to know how much tyre wear there is live in the race. So the decision on whether or not the team thinks the tyre will re-start is based mostly on the strategic experience of the team in addition to information about the tyres from the drivers before the Safety Car.

The strategy group is in a continuous evaluation process, trying to anticipate what would happen if the Safety Car were to come out two, three or even five or more laps down the line, so that they can make the call on a pit stop as quickly as possible. If the team decides the situation in the race offers a good opportunity for a pit stop under a Safety Car, the driver is told "You're in your Safety Car window". That way the driver knows that he can come in without needing further confirmation from the team. The pit crew would already be waiting for him because they're on standby as soon as the Safety Car is deployed.

For the drivers, the re-start of the race is especially challenging. This moment is tricky because the tyres don't just lose temperature under the Safety Car, but also grip. F1 tyres generate the most grip in a specific temperature window that is usually well above 100 degrees Celsius. Outside of the temperature window, the grip levels drop quite considerably. In order to reach the maximum grip as fast as possible, the tyres are pre-heated to 110 degrees before they go on the car. Under a Safety Car, however, the tyre temperature can easily drop 40 degrees relative to peak, and thus lose a lot of its grip. So in terms of grip levels the first laps after a Safety Car are completely different to any other lap the drivers have done all weekend and it is very difficult to find the maximum level of grip. In Canada, this is particularly true for the big braking into Turn 1 and into the hairpin at Turn 10 as it is very easy to lock up the tyres. Especially braking into the chicane, it is very likely to see a change in position there as one driver will take more risks than the other. 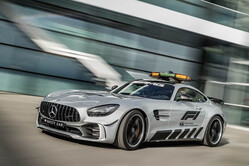 Depending on the layout of the track, it will typically take two to three laps to bring the tyres up to temperature again. But in the most extreme cases, it can take much longer than that. Baku, for example, is a track that makes it very difficult for the drivers to heat up their tyres as it features a very long straight where the tyres cool down and a lot of slow corners that don't generate a lot of energy into the tyres.

Brakes can also create quite a challenge under a Safety Car. When the brakes are already hot, they're at risk of overheating as they require airflow for cooling. Due to the slower speeds under the Safety Car, the airflow and thus the cooling effect is limited, so the brakes can easily overheat. Cold brakes, on the other hand, aren't great either as the brakes work best when they're warm. So the drivers might try and generate temperature into the brakes using various driving techniques. This, however, is difficult to control as it is extremely easy to generate very hot brakes, due to no airflow coming in.

The Safety Car is deployed "whenever there is an immediate hazard but the conditions do not require the race to be interrupted". It ensures the safety of the marshals around the track and the extra safety is certainly the biggest benefit from deploying the Safety Car. However, there are some collateral benefits for the teams - for example, with fuel saving.

A track like the Circuit Gilles Villeneuve in Montreal is fuel limited, meaning that the drivers cannot go flat-out for all 70 laps of the Canadian Grand Prix and will have to do some form of fuel saving to make it to the end on the 105 kg fuel allowance. Under a Safety Car, the drivers can save fuel which they can then use for maximum performance later when the race gets going again.

Last year in Canada, the Safety Car came out at the very beginning of the race after a crash on the opening lap in Turn 3. Under the Safety Car, Lewis Hamilton did lap times of over 2 minutes (2:02.231 on lap 2). Even with relatively cold tyres in his first lap after the Safety Car he did a 1:18.135, compared to 1:16.296 with warmer tyres in lap 10. So the lap under the SC took roughly 60 percent longer. The speed differences between the Safety Car and a Formula One car depend on the area of the track.

On a regular lap, an F1 car will take Turn 3 in Canada at roughly 125 kph; under the SC, however, they do only 45 kph. The difference in the hairpin (Turn 10) is roughly 15 kph (65kph vs 50kph under the SC). But it's not just the cornering speeds that are limited under the Safety Car, it's also acceleration and top speed.

As for the Virtual Safety Car, in general, the VSC and the Safety Car are quite similar. Both will bring down the tyre temperatures, both will make the re-start tricky. However, the VSC is usually less challenging for the team because the cars travel faster and thus the drop in tyre temperature is not as steep as it is under the Safety Car. This effect is intensified by the fact that a regular Safety Car typically lasts about four laps, but a VSC only tends to last one to two. The VSC also doesn't bunch the field up, so on the re-start the next driver should be the same distance behind as before the VSC was deployed.