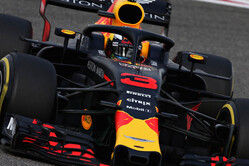 Adrian Newey has revealed that Daniel Ricciardo is facing a grid penalty in Montreal this weekend.

Though the Australian took a popular win in Monaco last week, it came at a price.

Just 18 laps into the 78-lap race the Red Bull driver suffered an MGU-K failure that left him 25% down on power for the remainder of the afternoon.

Though he held on to the lead, fending off half-hearted challenges from Sebastian Vettel and Lewis Hamilton, replacing the MGU-K is certain to cost him grid places while further component damage could see him demoted even more.

"He will definitely be taking some penalties in Montreal," Adrian Newey told Reuters, "we haven't heard at the moment just how many.

"One of the things is whether the battery was damaged or not, so until we know that from Renault we don't know exactly what we're facing," he added. "The K is definitely a penalty though."

Told that some sections of the media had claimed the MGU-K was salvageable, the Briton laughed.

"I rather doubt it," he said, "considering it caught fire and was a burnt out, charred wreck. I would be somewhat surprised at that one."

Asked about the upgrade Renault is scheduled to provide this weekend, he said: It's about one percent (more power), which is a tenth of a second so it's worth having but it's not a make or break."