Ricciardo would have Lance Stroll in his fantasy F1 team 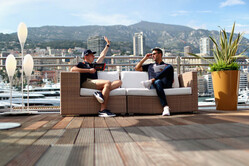 Daniel Ricciardo has revealed that he would have Lance Stroll in his fantasy F1 team... though not necessarily for the Canadian's racing skills.

In the latest bit of video silliness from the Austrian team, Max Verstappen and Daniel Ricciardo quiz one another on a range of issues ahead of Sunday's race.

Other than learning that both love the smell of 2-stroke from their karting days, the pair are asked who they would want to recruit to their all-time F1 fantasy team.

Max Verstappen doesn't hesitate in admitting that he would want Ayrton Senna and Michael Schumacher lining up on the grid for his team.

Ricciardo thinks James Hunt would be "cool", but admits that managing the Briton could be "hard work".

In the second car however, he wants Lance Stroll.

"I saw his boat out there," laughs the Australian. "Yeh, let's get Lance on the team. Sir Lancelot... I'm signing you up."

Another current F1 driver takes both barrels of the infamous Ricciardo wit when the Australian is asked about his greatest race ever.

"June 10th 2008," he says without hesitation. "Silverstone, race two, Formula Renault Eurocup, me versus Valtteri Bottas... passed him on the last lap... doo bruup! Passed him for the race win.

"He'd dominated all weekend," he continues, "so I just hung with him and then on the last lap, he like locked and I was able to get him.

"So thanks Valtteri... nothing's changed."