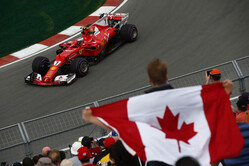 As in Melbourne, this weekend's Canadian Grand Prix will feature three DRS zones.

Ahead of the season opener, officials announced that a third DRS zone was to be added at the Albert Park circuit, claiming that it would increase overtaking.

Unfortunately, such was the lack of passing - officially recorded at just 5 moves - overtaking (or the lack of it) suddenly took centre stage again, with officials subsequently announcing further regulation changes for next year with the intention of rectifying the situation.

Coming off the back of a season which saw overtaking down by 50% on the previous year, it was understandable that officials were concerned, ironically however, some of the races that followed Melbourne were overtaking-fests, leading to calls that perhaps the sport had reacted too quickly.

At Montreal this weekend, there will again be three DRS zones, even though the characteristics of the track, not to mention the weather, usually guarantee an entertaining race.

The first two activation points will be as in 2017, the first 55m before Turn 12 and the second 70m after Turn 14, while the third zone will run on the back straight between Turns 7 and 8.