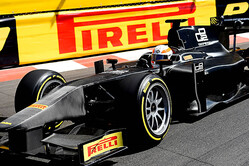 F1 is seeking to introduce 18-inch tyres as part of the sport's major rules overhaul in 2021, but they could be introduced as early as 2020.

With Pirelli's current contract to exclusively provide the sport's tyres running out at the end of next season, the Italian manufacturer has made no secret of its desire to see F1 move from its current 13-inch tyres to 18-inch.

Insisting that 18-inch tyres have more road relevance than the current 13-inch version, Pirelli has demonstrated the bigger tyres - which are currently used in WEC and Formula E - on a couple of occasions, most notably when driver turned commentator Martin Brundle took to the streets of Monaco in 2015 with a race-ready 18-inch GP2 tyre fitted to the (then) series development car. Previously, Charles Pic had run 18-inch tyres on the Renault in the (2014) post-British GP test.

"This is a very good, positive initiative," said Brundle at the time, "and it was really interesting to drive the Formula One circuit in a GP2 car with these tyres.

"It actually felt completely normal," he continued, "by the second lap I was able to push the car a bit; I had my foot flat to the floor occasionally! Initially, I was expecting the car to feel a lot stiffer with these tyres, but that wasn't the case at all.

"There are a few things to get used to - for example it's harder to see exactly where the apex is - but as a driver your job is to adapt. I wish I could have done a few more laps."

While there are a number of factors in favour of the move, most notably the 18-inch tyres being less resilient than their current counterparts, teams had argued that the move would drive up costs. However, it is understood that opinion has changed and a move to 18-inch tyres could come as early as 2020. To that end such a move would be included in the tender when it is put out to manufacturers as Pirelli's current contract comes to an end.

Weighing heavily on the move to 18-inch tyres being introduced in 2020 is the fact that no new manufacturer - should they win the contract - is going to be interested in developing 13-inch tyres that will be phased out after just one season. The next contract will run from 2020 to 2022 and tenders have to be submitted by the end of this month.

Pirelli, which is understood to be seeking the switch to 18-inches as part of its new contract bid, is happy to make the switch.

"We are open," says CEO Marco Tronchetti Provera, according to Motorsport.com. "Obviously they have to find the right regulation, and have the teams ready to adopt it.

"There are a number of issues of aerodynamics, of suspension and so on," he continued. "When the teams are ready, we are ready.

According to Auto Motor und Sport, another move under serious consideration is to return to the concept of having smaller wheels at the front than at the rear.

The German publication cites the fact that smaller front wheels would mean less turbulence to the rear and less weight.