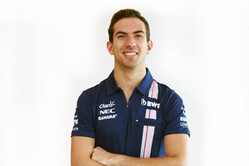 The Canadian, currently tenth in the F2 championship, is scheduled to take part in a number of FP1 sessions with the Silverstone-based outfit this year.

Last month Latifi, who was previously a test driver with Renault, participated in the Barcelona test, driving the VJM11 on both days.

"I have no doubt that driving in FP1 at my home Grand Prix will be one of the biggest highlights of my year!" he said. "As much as I will be looking to enjoy the opportunity I know I am there to do a job for the team. I’m hoping to give them as much valuable feedback as possible to help push along the program going into FP2."

Latifi's father recently bought a 10% stake in McLaren for around £200m, however all parties were at pains to make clear that this does not involve a move to Woking for the F2 driver.