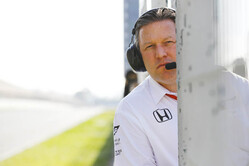 Earlier this week, McLaren confirmed that Iranian-born Canadian, Michael Latifi has invested £203.8m in McLaren Group, a move which, according to the company "significantly strengthens the group's balance sheet and underpins its growth plans".

Needless to say there were raised eyebrows in the paddock with some suggesting Latifi's sizeable investment would eventually lead to an F1 seat for his son Nicholas, currently 9th in the F2 championship and test and reserve driver with Force India.

"It's never been a discussion," said the American. "He's doing quite well in F2. At McLaren we're always looking for the best drivers we can get. He's doing a good job but it's never been part of the conversation."

Asked what bearing the investment will have on the race team, Brown replied: "Ultimately his investment goes into McLaren Group, so the board and the shareholder will ultimately decide where they want to invest that money.

"I presume it will ultimately be sprinkled into all three business in some way, shape or form," he added, "and Formula 1 obviously has a big thirst for expenditure to try to keep up with the teams here to the left of me that have a larger budget, so I'm sure some will go towards investing in our racing team but also developing our road car and our technology business."

With the team making much of three new partnerships announced thus far over the Monaco weekend - FxPro, the world’s number one online forex broker, HTC, a "pioneer in innovative, smart mobile and virtual/augmented reality (VR/AR) technologies, combining cutting edge motorsport technology with groundbreaking immersive technologies" and Sparco, the Italian racewear provider - Brown was asked why McLaren hadn't been as forthcoming about Latifi's investment, having only confirmed the deal once reports began appearing in the media.

"Shareholder breakdown is, I believe, published," he replied, "so anyone that's interested in that can look that up accordingly. And any time you have, whether it's a sponsor announcement, a driver announcement, an investor announcement, you have a time in place in which you hope to announce that and you did a good job in getting ahead of that story. So that news was going to come out in due course. We chose to accelerate that news after the word got out."

Following Ron Dennis' 'departure' it was no secret that McLaren was seeking further investment, not least to fill the £275m hole left when he gave up his 25% stake in the company, the Briton at one stage resorting to securing £37.5m on 13 rare and historic F1 cars as he waited on his money.

With the company said to be seeking to raise around £500m, partly to replace Dennis' money and also to further invest in its future, there was speculation that Mike Zoi, the Miami-based Russian behind the increasingly powerful Motorsport Network, would become involved.

Indeed, when Zak Brown was appointed executive director of the McLaren Technology Group in November 2016, ten months after being appointed non-executive chairman at the Motorsport Network, some assumed that the Woking team might soon become the latest addition to Zoi's ever expanding empire.

Asked if there might yet be further investors, Brown was giving little away.

"More shareholders would be decided by the shareholders," he said. "I'm not aware of any conversations going on in that sense, I think everything's quite settled and everyone's quite happy with the shareholder makeup that we have."