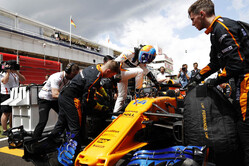 Fernando and Stoffel both fought hard races after a chaotic first lap, on a track where overtaking opportunities are at a premium. Both drivers dropped three places apiece in the incident at Turn Two, and battled to regain them through the mixed-up pack.

Stoffel made a late one-and-only stop in an effort to take advantage of fresher tyres in the closing stages, but his race was brought to a halt on lap 38 when he reported a loss of drive, with a suspected gearbox issue.

After a number of strong on-track battles that enabled him to regain the three places he lost at the start, Fernando finished eighth to bring home four points for the passionate home crowd - a fifth consecutive points-scoring finish in as many races.

Fernando Alonso: "We started on the Supersoft tyres today because of yesterday's qualifying, so the plan was to gain some positions in the first couple of laps and then stop very early to change tyres. Instead, we found ourselves losing several positions in the first lap because of the incident at Turn Two, so at that point I thought it was impossible to get any points today. But, luckily, we had a good race, we had a good strategy with a good call for only one stop on the Medium tyres, and we took those four points.

"During the race, I was concentrating more on the sky than the cheering grandstands, as in some corners there were very dark clouds. I thought maybe some rain could have helped us, but unfortunately it didn't come in the end.

"It was difficult to overtake today - I was behind Leclerc for a long time - as we are still lacking some straight-line speed to be able to pass. This is something we're working on; we know where our car's weaknesses lie and hopefully we'll find a solution quite soon. We made a good step forward here, but we know it's going to be a tough battle until the end of the season. It's important to score points every race and we have done so far for five consecutive races. I'm happy right now."

Stoffel Vandoorne: "It was an unfortunate end to the race. I felt that the race was going to come towards us at the end, we had a one-stop strategy and extended the first stint to go very long on the Soft tyres. We had managed the tyres well and we wanted to create a big tyre delta to the others. It's always hard to predict exactly where we would've ended up, but I feel at the end we could've had some more chances to overtake.

"We had a good launch for the first time this season! The first corner was all about avoiding cars in slippery conditions with a lot of cars spinning off. It was difficult to keep the car on the track, especially at the beginning. We don't know yet exactly what the problem was that ended our race early, but it looks like the gearbox as I lost drive completely. It's a shame because we had reasonable pace.

"The upgrades we brought here are definitely a first step forward. We've been able to make progress especially for qualifying, but there's still a long way to go and we need to keep improving, and keep bringing some new parts to every race.

Eric Boullier, Racing Director: "Today's race wasn't quite the result we'd hoped for, but, given how the race unfolded at the start, and on a track where passing opportunities are notoriously limited, we should be satisfied with the outcome. Both drivers did extremely well to negotiate their cars through the melee on the first lap, but were unfortunate to lose three places each.

"Although he put in a committed drive, our 100 per cent reliability streak took a dent with Stoffel's retirement, the cause of which we are continuing to investigate. Fernando drove a strong race in front of his home fans, and fought hard to make up the three places he lost at the start to bring the car home inside the top 10 once again.

"The competition was tough out there today, but even after a challenging race where luck didn't swing our way, we still managed to come home with four valuable points. We start afresh in Monaco, encouraged by the performance gains we've made this weekend, and our aim is to keep building on this as the season progresses."